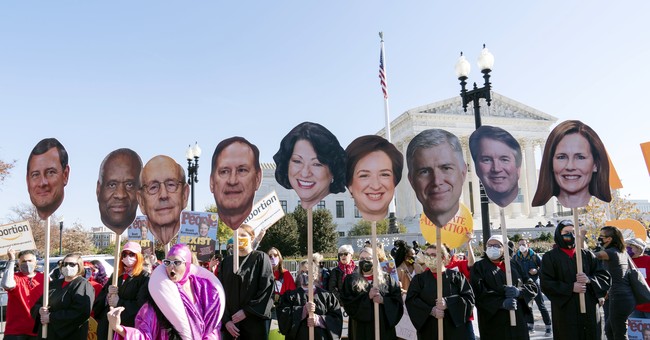 Newsflash: The Left actually celebrates abortions. My colleague Brandon Morse already expertly covered this morbid behavior back in 2020, but with the recent leak of a SCOTUS opinion striking down Roe v Wade — and the Left’s unhinged reaction to it — it seems like the perfect time to re-visit the subject.

Abortion has been a complicated issue for decades, and despite predictions at the time, 1973’s Roe v Wade did not magically make these divisions go away. In fact, the infamous decision arguably made the divide wider because its legal foundation was pathetic, and it basically just made up a brand new right that was never enumerated in the Constitution or its amendments.

Whichever side of the argument you’re on, however, it’s despicable to glamorize what should at the very least be a sober event. Death penalty advocates aren’t known to celebrate executions with confetti and dance, but that’s what some of these sick puppies do.

Reader Caution: extremely obnoxious behavior ahead, like these college girls:

Dancing and singing not enough to celebrate your abortion? Have a party:

You could even celebrate your “abobo-versary” by making a gingerbread abortion clinic:

It’s not just tweets that are truly offensive, it’s often also the things they say. Comedian Michele Wolf tried to make the whole thing a joke, saying in a 2020 comedy special, “You can feel any way that you want after an abortion. Get one! See how you feel!” She added, “You know how people say you can’t play God? I walked out of there being like, ‘Move over, Morgan Freeman. I am God!'”

She’s God because she ended a life. That’s not funny, that’s psychotic.

Abortion not making you laugh? Maybe multiple abortions will:

Not to get outdone, in 2019, New York City passed a strict abortion law that allows late-term abortion until the baby’s due date if it meets certain requirements. A sober signing ceremony soon followed. Actually no, this was disgraced former Governor Andrew Cuomo’s New York at the time, so the legislature instead erupted into raucous cheers upon the bill’s passage. One World Trade Center was lit up in pink, because yes, our symbol of democracy and freedom should be used to celebrate late-term abortions. That’s not weird.

There are sites littered over the internet, including a Reddit feed called “Lemme Celebrate My Abortion,” a Buzzfeed page featuring a glamourous photoshoot of happy parents wearing “I had an abortion” T-shirts, even a Twitter feed called “@ShoutYrAbortion” (which, natch, is filled today with F-bombs directed at the Supreme Court).

On one of these sites, some aspiring author wrote a short story called “Abortion Celebration Party.” I will spare you the disturbing details, but I’ll let you in on the giddy last sentence: “This baby is dead!” Lovely.

This kind of behavior is macabre, ghoulish even, and has only further served to rip us apart. Whether you believe in no abortion, abortion with restrictions or even “abortion” up and until after birth as some California legislators apparently do, it’s never a cause to celebrate. People who do are celebrating death, and that is vile.