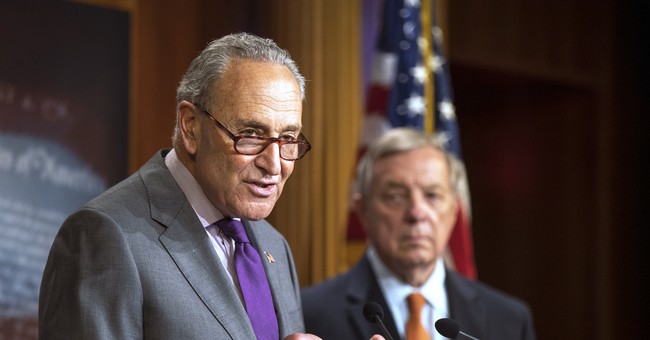 The meltdowns of the Democrats were something to behold on Tuesday over the leaked draft opinion, suggesting that the Supreme Court was going to overturn Roe v. Wade.

But they were also stoking anger against the Court, threatening and trying to intimidate the justices, and undermine another branch of the government. Never let Democrats ever argue they’re “preserving norms” — all they ever are trying to do is preserve their power, and they don’t care what they have to do to hold onto that power.

Here’s Rep. Pramila Jayapal (D-WA) saying that the Supreme Court justices “do not have the right” to decide-if it’s not how the Democrats want them to decide.

Democrat politicians are showing a mixture of ‘meltdown face’ to the base and smiles that they now think they have a focal point on which to rally people. Listen to Sen. Dick Durbin (D-IL) belittle Americans’ concern about inflation and the border, claiming the election in November is now going to be all about “privacy.”

While he says that, Senate Majority Leader Chuck Schumer (D-NY) is laughing gleefully in the background, thrilled he finally has something on which Democrats can run, rather than just lying about how badly Joe Biden has tanked the economy.

So, if you were wondering how they were going to address the problems of inflation? They made it plain — they’re just going to ignore it and the suffering of Americans over that and the border. They’re going to pretend those are just imaginary issues. If you’re struggling because of the inflation prompted by their overspending, not only don’t they care, they’re telling you that you should care about what they demand you care about. Talk about detached from reality. If they go with that take, they should prepare to get destroyed in November because that isn’t going to go over well. The GOP should just play this on a loop in ads, to show how little Democrats care about Americans.

But if we’re going to talk about “privacy,” let’s talk about government mandates on Americans, lockdowns, suppression of speech, and forming a Ministry of Truth. If they think that’s an area that helps them, they’re going to get burned big time.

Meanwhile, Schumer was threatening and trying to intimidate the Supreme Court, not to mention treating the draft opinion as though it were the final decision of the Court.

Schumer also indicated that court-packing was still on the table.

If it isn’t clear what he means when he accuses justices of lying to the Senate; he’s signaling he intends to try to impeach any justice who votes against Roe. These kinds of threats are an improper political attack on the independence of the Court. I say they are unprecedented, except that this isn’t even the first time Schumer has threatened the Court — he previously threatened Justice Gorsuch and Justice Kavanaugh, saying they “had unleashed a whirlwind” and “would pay the price” for their decisions. Republicans need to call for Schumer to be censored for these threats — the Court needs protection from these Democrats who will stop at nothing.

The one saving grace from these radicals who would tear down our very system to get what they want is that they don’t have the votes in the Senate to codify Roe, with Sen. Joe Manchin (D-WV) and Sen. Kyrsten Sinema (D-AZ) sticking to their guns on the filibuster.