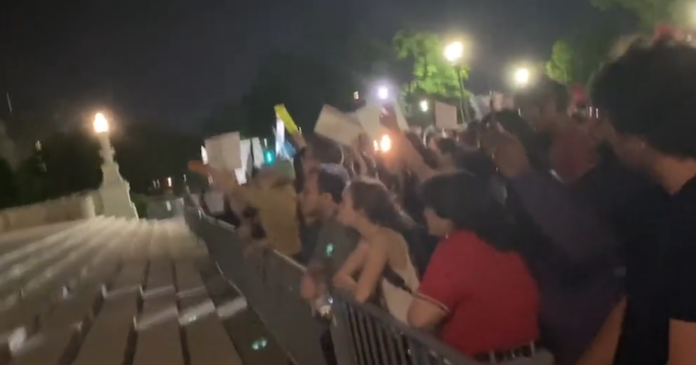 Last night, an earthquake struck the political sphere after a leaked draft showing Roe v. Wade being overturned was published by Politico. At least five justices were reported to have signed onto the majority opinion, written by Justice Samuel Alito, though nothing is final until it’s final.

And that’s the point of the leak. This is a major breach of the court (and reportedly an illegal one as well), likely by the office of one of the leftwing justices, with the intention pretty clearly being to pressure one of those five to change their vote. For all the talk of norms and respecting our system of governance, the left has decided none of that matters now that something they don’t like has happened.

Monday evening offered a preview of the coming storm as “protesters” immediately appeared outside the Supreme Court building. Wild scenes unfolded, and the rhetoric used should worry everyone about where things are headed.

In case you haven’t noticed, everything the left doesn’t like is “fascism.” In this instance, a duly appointed body and constitutionally enshrined branch of our federal government simply returning the decision-making on abortion back to the state level is just like Hitler or something. How? Well, the left never gets around to actually explaining that, but they’ve seen the “Handmaid’s Tale” so that’s got to count for something.

And to be clear, an overturning of Roe v. Wade, while a huge victory for life, is not even a total victory on the issue. States like New York and California will simply codify abortion until birth as a right. People who want to kill babies will still be able to. Yet, even the mere chance that some lives will be saved is enough to send the rabid left into fits of rage. It’s hard for me to describe in words how sick and twisted that is.

Some of the encounters outside the court got personal, ranging from humorous to scary as protesters and counter-protesters clashed. The first clip below is basically Twitter but in real life.

Meanwhile, there are verified Democrat figures calling for “revolution” on social media, and it certainly feels like the left is ready to reenact the riots that occurred during the summer of 2020. If everything they don’t like is “fascism,” then that justifies just about anything, which is why rhetoric like that is so worrisome. It’s at this point that you’d hope a responsible news industry would step in and report the facts, but instead, they are feeding the flames. Things are going to be a lot worse so buckle up because 2022 is just getting started.