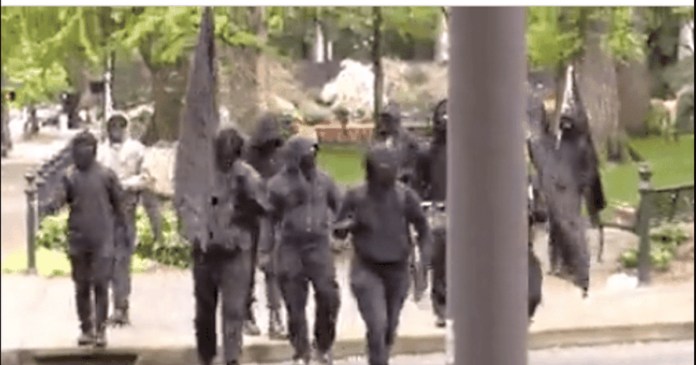 May 1 is May Day, the day of the year when Antifa and other radical leftists tend to let loose with violence.

On Sunday in Portland, Antifa directed their ire at GOP volunteers who had gathered for an event for the Republican gubernatorial candidate Stan Pulliam, who supports re-funding the police. That’s a no-no to Antifa, so they attacked the event, throwing smoke grenades, paint-filled balloons, and fireworks at people including elderly people and families with little kids — not caring who they might hurt in the process.

Two people were injured by “mortars,” according to the police.

Despite this being near the police headquarters, the police didn’t show up until after the Antifa group had left.

“And then we wonder why we have all the violence and destruction happening on our streets,” he added.

The other difference is that, unlike in the 1970s, now the Democrats have unleashed Antifa by their failure to respond and take them down. The Portland Police Bureau said that although they had been monitoring the situation, “there were only a few officers available.”

Thanks, Democrats. This is where they have taken us now, to where Antifa members feel they can attack the elderly and little children with impunity as well. This response was probably good on the whole, as some calling 911 have to wait for hours when they’re busy.

This is what happened in 1930s Germany, when the Brownshirt fascists tried to stomp out the rallies of other political parties. Antifa isn’t antifascist; they’re acting like full-on fascists.

The day before, Antifa had been throwing projectiles off an overpass in the Portland area down on the People’s Convoy that was passing underneath.

At 6:54 p.m., North Precinct and East Precinct officers responded to a report of a group throwing objects off the Northeast Glisan Street overpass over Interstate 205 and that a shot had been fired,” Portland Police said in a statement.

“Portland Police were monitoring a protest ‘convoy’ that was driving through Portland and counter-demonstrators confronting them. Officers determined that the shot fired call was likely related.”

Video from the incident shows a group of approximately five people on the Glisan Street overpass. From the high position, they appear to be throwing objects and making offensive gestures at vehicles.

Unfortunately, this is going to go on until you throw the Democrats out of power-and properly investigate and lock these folks up.