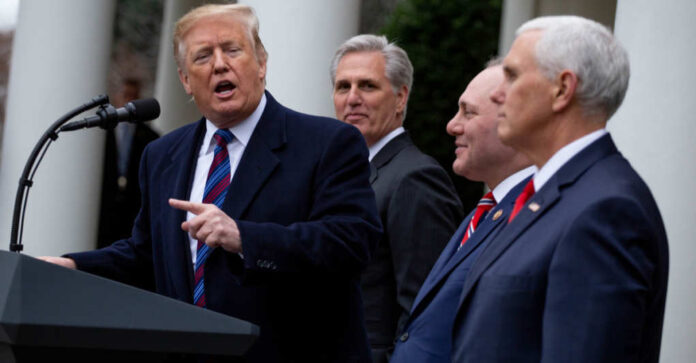 As the never-ending saga of making former President Trump look bad continues, people like GOP Leader Kevin McCarthy (R-CA) are getting swept up in new and disturbing details surrounding the January 6th insurrection on the Capitol. As new testimony and audio recordings are coming out, the more we are finding out about that day and people are being treated as if they ordered them to storm the doors.

An audio recording between McCarthy, Rep Liz Cheney (R-WY), Senate Minority Leader Mitch McConnell (R-KY), and other leaders during the aftermath of that day has now come to light. McCarthy initially issued statements condemning the attack, he remained very loyal to Trump in the public view as well as in private. The conversations that have been uncovered paint a very different picture as they detail how he was searching for ways to handle it and hold Trump accountable for the attacks.

The New York Times political correspondents Alexander Burns and Jonathan Martin have released a report about what they heard on those conversations. In that report, they provide some damning evidence against McCarthy and others. Their statements make it very clear just how deceptive McCarthy’s words in public were compared to his private actions.

“In the days after the Jan. 6 attack on the Capitol building, the two top Republicans in Congress, Representative Kevin McCarthy and Senator Mitch McConnell told associates they believed President Trump was responsible for inciting the deadly riot and vowed to drive him from politics…Mr. McCarthy went so far as to say he would push Mr. Trump to resign immediately: “I’ve had it with this guy,” he told a group of Republican leaders, according to an audio recording of the conversation obtained by The New York Times.”

The report goes on to detail McCarthy’s discussion of a second impeachment from the Democrats with Cheney on Jan 10th. When pressed by Cheney about Trump resigning if this happened, he admitted he doubted he would but that he would be recommending it. This clip supports the flip-flop actions McCarthy has been accused of since that day. Given his push for an investigation into the events of Jan 6th, it quickly turned into staunch opposition after Nancy Pelosi rejected the idea of the addition of Reps. Jim Jordan (R-OH) and Jim Breaks (R-IN) to the J-6 commission.

In response to her refusal to cooperate, McCarthy has dug his heels in and refused to testify. This has led to numerous subpoenas and thorough investigations into his actions as well as other Republicans. With audio being leaked of him claiming Trump was responsible for the attacks, and that Trump even admitted to being responsible, McCarthy is finding himself in very hot water.

These leaks are inspiring more doubts among Republicans and Trump supporters about how McCarthy’s allegiance to Trump and the America First agenda. Considering how quickly Mitch McConnell turned his back on Trump, the evidence of McCarthy being even more of a ‘what have you done for me lately’ politician. As of late, he has been doing the best he can to teeter the line between supporting Trump and backing McConnell’s goals to solidify the message for Republicans, as well as achieving their goals in Congress.

Considering McCarthy believes he’ll become Speaker of the House should they take the majority in the 2022 midterms; granted he may have sabotaged his own goals. The flip-flop agenda he has been perpetuating, the way he has been burning the candle at both ends, and his refusal to draw a line in the sand and stick to it is concerning. Republicans and the American people cannot trust him or what he has to say. Until he comes clean and tells the whole truth he may very well be finding himself losing everything.