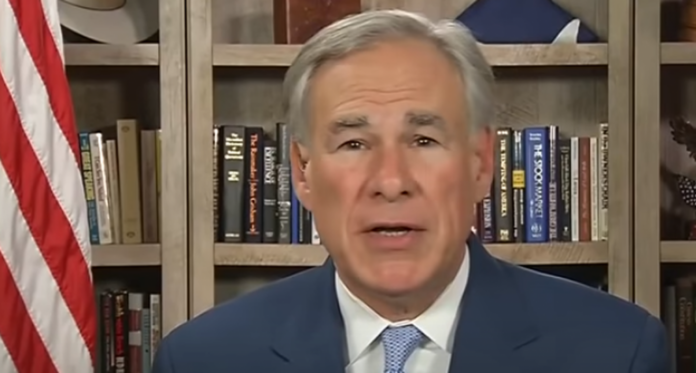 Texas Governor, Republican Greg Abbott is fed up with President Biden and his refusal to take responsibility. He sees how little Biden is doing for the American people, not just Texans. He understands how Biden is setting the nation up for failure, and he is ready to see things turn around. While there are several areas of major concern for Abbott, the biggest one is on the border with Mexico. Given how much of Texas borders Mexico, it makes sense.

Appearing on The Guy Benson Show on April 25th, Abbott was asked about the death of Texas National Guardsman Bishop E. Evans. The 22-year-old drowned after he jumped into a river in Eagle River, TX while trying to rescue two illegal immigrants trying to cross the border into the U.S. Later, there was confirmation that the people he gave his life trying to save were smuggling drugs into the country.

Benson asked his guest about blaming Biden for this death, and Abbott said it was “100% correct” for Biden to receive the fault in this death. “[It’s a] travesty that we as a state have to deploy the National Guard to the border. We have to do so because of the Biden administration’s mishandling of border security. We didn’t have to do this under the Trump administration because the Trump administration put four policies into place, that led to the lowest border crossings that we’ve had in decades. Joe Biden came in, and he eliminated all of those things. And immediately he sent a message to the entire world that the border of the United States was open and guess what? The world heard it, and the world responded by coming to our border.”

Ensuring Biden gets all blame when asked is a great move for Abbott to make. Not politically, but simply because he needs to put that blame on the right shoulders. The lax policies, horrific protection assets, and an overworked and understaffed Border Patrol has made a revolving door for illegals to cross over from Mexico. These steps alone are enough to make it enticing to come over, but together, it’s like Biden rolled out the welcome wagon.

Abbott, in turn, has had enough of things. From instituting any policy he can to help prevent them from crossing to activating the TX National Guard, to bussing them to DC for Biden to deal with, Abbott is taking every step he can to fix the situation as best he can with the tools his state currently possesses. Despite the liberal cries of this being unfair to Hispanics (and many who aren’t dealing with the border problems calling him racist), most Hispanics who are here legally are more than happy with the job he is doing.

Benson introduced Biden’s Texas opponent Beto O’Rourke’s policies for the border as a contrasting stance of someone who has been there. While Abbott feels that there wouldn’t be any difference between the two, he explained that O’Rourke wouldn’t be popular with Texans or Hispanic voters. “Hispanics who live on the border are tired of their communities being overrun by these open border policies…We have a good chance for GOP to win majority of Hispanic voters in Texas.”

The message from Abbott to ensure this Guardsman is not only remembered but that someone is held accountable for his death is something this country has been missing. While certainly the illegals he was trying to save would have some of the blame, as they are not here and they likely wouldn’t be crossing if not for Biden, he earned the blame. As Abbott said, if the policies and the way Biden is enforcing federal law were enforced properly, they wouldn’t be flocking here. Instead, Biden has turned the southern border into a welcoming party for the newest illegals.