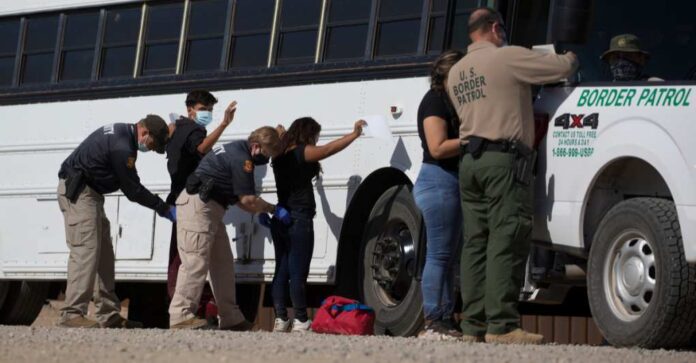 Title 42 is one of the most important pieces of legislation still in place from the Trump administration. It is what protects the country from allowing random illegal immigrants from across the border. While Title 42 has been used on various occasions throughout history, Trump brought it into place as a way to prevent the spread of communicable diseases as a result of the COVID pandemic.

Title 42 allows us to maintain a public health policy where we can expel anyone attempting to cross the border in an unauthorized manner in the name of preventing the spread of COVID-19.

Considering that those crossing the border are neither vaccinated against nor tested for COVID, Title 42 is of the utmost importance for the overall public health of Americans. It is also what is preventing a massive spill of illegal immigrants into the country – more so than what the Biden administration is already allowing.

The Biden administration has already announced that they plan to lift Title 42 by mid-May. Of course, this is crazy when they are also saying that COVID is still spreading enough that they need to keep certain mandates in place for Americans.

Republicans everywhere have been screaming that the lifting of Title 42 would be extremely dangerous and unsafe for the country. And many Americans agree.

It’s been a tug-of-war to see which side of the political fence will win. Unfortunately, COVID isn’t being treated as a public safety issue – it’s a political issue. And those on the right seem to want to use science and common sense. Only those on the left can’t see past their own power base to understand why Title 42 is a critical measure.

The GOP has been given a win. It’s further proof that the GOP is looking out for the good of the country. It’s why the red wave seems to be gaining intensity as it crashes into various liberal cities and states from coast to coast.

Americans are tired of the liberal ways and the hypocrisy.

Republican attorneys general across the country have been requesting that the end of Title 42 cannot and should not happen.

A judge has recently indicated that the GOP will be granted the win. According to Judge Robert R. Summerhays, “For reasons stated on the record, the Court announced its intent to grant the motion. The parties will confer regarding the specific terms to be contained in the Temporary Restraining Order and attempt to reach agreement.”

This is worthy of a celebration. It’s proof yet again that the Biden administration is overstepping – and that they have not been looking at what’s best for our country.

The temporary restraining order was filed on April 21, which means that the Biden administration has to fully implement Title 42. This requires that Alejandro Mayorkas of the Department of Homeland Security needs to pay close attention. The federal government has to comply – and that means the expulsion of over 1 million migrants.

As Attorney General Eric Schmitt tweeted, “In a lawsuit originally filed by Missouri, Louisiana, and Arizona, our Office just obtained a temporary restraining order to keep Title 42 in place. This is a huge victory for border security, but the fight continues on.”

Schmitt is right. This is a huge victory. However, if we want to continue to focus on border security, we need more of the Trump-era legislation reinstated.