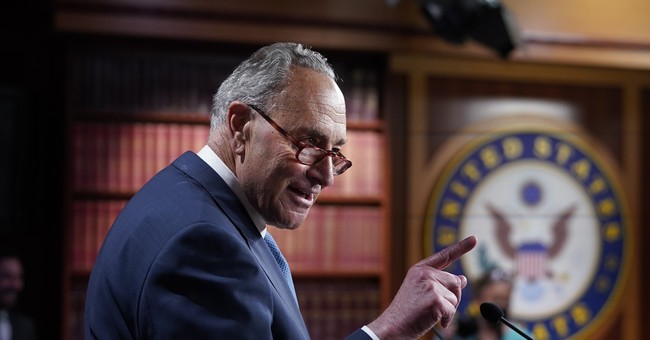 Joe Biden has been telling a lie. Yes, I know it’s far more than one lie; he’s told many. But one lie keeps cropping up again and again in virtually all his remarks — that he doesn’t intend to raise taxes on people who make under $400,000 a year.

But we’ve already seen how Biden has raised costs on us through inflation, which he also falsely said was “transitory.” His Build Back Broke plan proposed $2.5 trillion in new taxes that would give the U.S. the highest or near-highest tax rates in the developed world. Thank God, it didn’t pass, although that part about raising taxes may not be dead yet.

Joe Biden has been saying Congressional Republicans will raise taxes, and get rid of Social Security and Medicare. That is another big lie, Sen. Mitch McConnell (R-KY) has made it very clear that the Republicans are not going to pass any such thing.

But it turns out, you can’t say the same thing about the Democrats. Senate Majority Leader Chuck Schumer (D-NY) has let the cat out of the bag that they’re still working on going for higher taxes, despite the BBB going down to defeat. Their solution for Americans being crushed by inflation: take even more money out of their pockets.

Listen, as Schumer not only says they’re going to do that, but he also lies about the Trump tax cuts.

“Reconciliation is very, very important,” Schumer responded. “If you want to get rid of inflation, the only way to do it is to undo a lot of the Trump tax cuts and raise rates.

“No Republican is ever going to do that. So the only way to get rid of inflation is through reconciliation,” he added.

In other words, Republicans wouldn’t vote to raise tax rates on people. Democrats have to try to slip it through in reconciliation, so they can hope to pass it without getting any Republican votes.

Democrats sparked inflation by going with Biden’s overspending and now, they would make things even worse with more taxes, if they go ahead with this idea.

Meanwhile, they’re lying about the Trump tax cuts, which was one of the reasons that the economy was doing so well under President Donald Trump. The tax cuts helped most Americans — contrary to the lies of the Democrats.

“The available evidence is clear: Based on tax data from 2017 and 2018, the Tax Cuts and Jobs Act reduced taxes for the vast majority of filers, led to substantial improvements in upward economic mobility, and disproportionately benefited working- and middle-class households, many of which experienced tax cuts topping 18 percent to 20 percent,” analysis from the Heartland Institute explained.

Ironically, the San Francisco Federal Reserve has attributed the inflation crisis, in part, to Biden’s COVID relief bill, which injected trillions of dollars into the economy.

McConnell hammered home the point — it’s Democrats who are coming for your wallets, big time.

The Wall Street Journal pointed out that Schumer is just flat-out wrong when it comes to tax increases reducing inflation.

This is the same theory that told us the government can spend whatever it wants and not worry about rising prices. The Federal Reserve can simply keep suppressing interest rates and finance whatever politicians spend. Well, Congress and the Fed took Ms. Kelton’s advice, and here we are with the highest inflation in 40 years.

The raise-taxes strategy gets the inflation dilemma exactly backward. Congress and the Federal Reserve pumped up demand for two years to the point that supply couldn’t keep up. The Fed is finally doing its part to suppress demand by belatedly raising interest rates and planning to trim its balance sheet. The main cure for inflation is better monetary policy.

But tax increases would make inflation worse by further suppressing the supply side of the economy. That’s especially true of the corporate tax increases that Mr. Schumer is pitching. They’d suppress productive investment precisely when the economy needs it to offset the Fed’s tighter money. This is what happened in the 1960s and ’70s when higher taxes on corporate profits and individual incomes contributed to inflation by depressing investment and productivity growth.

So, not only would Schumer take money right out of our pockets, he’d make the inflation we’re already suffering even worse because Democrats fail to understand economic policy.