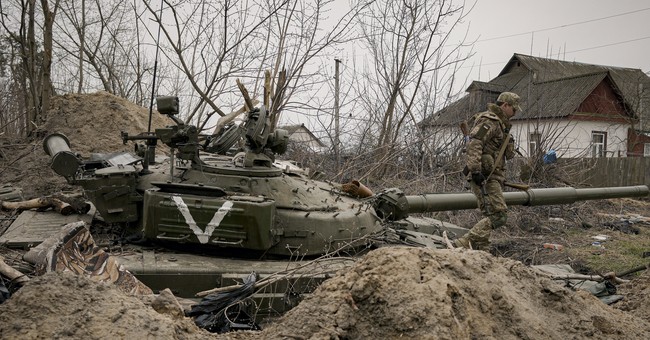 The Ukrainian battlefield of Putin’s War is incredibly lethal. In the sixty days since Putin’s three-to-four day invasion of Ukraine started, Russia has had 1,700 vehicles or major pieces of equipment destroyed and another 1,200 captured. Tanks losses numbered 560 destroyed and 214 captured, while losses of infantry fighting vehicles/armored personnel carriers come to 930 destroyed and 330 captured. These are not estimates; these are floor numbers that have been counted and geocoded. By the same methodology, Ukraine has lost at least 200 tanks destroyed and 70 captured, along with 790 infantry fighting vehicles/armored personnel carriers destroyed and 90 captured. No one really knows how many vehicles have been lost to combat damage or wear-and-tear. (For the full inventory, I recommend this link.)

By way of scale, Russia entered the war with about 120 Battalion Tactical Groups (BTG)) representing approximately 75% of the Russian Army’s combat power as well as the cutting edge of that power. Keep in mind that this is not a Russian Army affair; there is Naval Infantry from as far away as Vladivostok as well as troops of the Rosgvardiya, or the National Guard of Russia (read more about that august body in this post, Top General in Putin’s Personal Army Is Arrested by FSB). At full strength, a BTG looks like this:

The tank losses alone represent all the tanks in 70 BTGs.

This lethality is why the Ukrainian government has been screaming for more weapons from anyone who has them. Not just munitions, like Javelin or Starstreak, but tanks, infantry fighting vehicles, and artillery. (Read Cutting Edge Weapons Are Being Sent to Ukraine by the US and Britain, But Is It What They Really Need?.) There have been a lot of fits and starts, we all know the on-again-off-again story of the transfer of MiG fighters belonging to Poland, Bulgaria, and Slovakia to Ukraine *Biden Junta Duplicity Revealed After Poland Declares MiGs for Ukraine Are Ready to Go). But now it looks like things are headed in the right direction unless you are one of those who think Putin’s invasion is justified.

As incredible as it may seem, Ukraine now outnumbers Russia in the number of tanks on the battlefield.

Thanks to European resupplies, Ukraine’s military now has more tanks on the battlefield than Russia does two months into the war, according to the Pentagon.

The delivery in recent weeks of Soviet-era T-72 tanks to Kyiv from the Czech Republic and other European Nato allies has effectively eroded Russia’s advantage, experts have claimed.

“Right now, the Ukrainians have more tanks in Ukraine than the Russians do, and they certainly have the purview to use them,” an unnamed senior US defence official told reporters on Thursday.
Ukraine’s armed forces have previously claimed Russia has lost more than 680 of its tanks, the majority of which were destroyed, while some changed hands after being found abandoned.
A wealth of video footage has emerged online of Russian tanks and armoured vehicles on fire, while others appear to be rusting by the side of roads in rural Ukraine, or being towed by Ukrainian tractors.

Experts have put the significant Russian losses down to the advanced anti-tank weapons Western nations have given to Ukraine, as well as poor maintenance, and lagging morale among Moscow’s recruits.

“That the Ukrainian Army has reached ‘tank parity’ with the Russians in Ukraine is significant,” said Mick Ryan, a retired Army Major General and Adjunct Fellow at the Centre for Strategic and International Studies think-tank.

“Terrain in the east is more conducive to combined arms manoeuvre, and numbers will matter. So will good leadership and tactics, which is where the Ukrainians hugely outmatch the Russians.”

While not the most advantaged military kit, the T-72 are versatile, and unlike many Western tanks, equipped for tough terrain and the deep-fording of rivers.

The US has delivered hundreds of millions of dollars in aid, however, it has not offered any tanks to Ukraine because its military is using Soviet-era equipment.

The tanks used by Ukraine are Soviet-designed trash. The tanks sent to Ukraine by NATO countries are more of the same because the Ukrainian Army is familiar with them. Some of them, like the 100+ Polish T-72s, have had substantial upgrades such as thermal imaging, but technically they aren’t in the same league as a main battle tank produced in Western Europe. And, unlike the claim in the article, Western tanks have much better cross-country performance, and the only place a snorkel-equipped tank works most of the time is in a Soviet propaganda video. Going into the next phase of Putin’s War, the Ukrainians will have numerical superiority, superiority in training, and a slight advantage in the quality of their tanks.

Czechia has signed a contract with Ukraine to repair Ukrainian tanks, and it is believed Slovakia may participate in this venture. It is being spun as evacuating tanks from Ukraine, but I think it is safe to predict that Czech technicians will end up inside Ukraine.

Russia is already in a situation where it is losing the numerical edge it held over the Ukrainian regular army. I predict their personnel situation will worsen as current conscripts are released from active duty, and draft resistance becomes more pronounced. The lightly equipped Ukrainian Territorial Defense Forces grow by leaps and bounds, bolstered by several thousand foreign volunteers. New Ukrainian Army formations are in training and will soon enter the battle. In a matter of weeks, Russia will be facing an army that is qualitatively superior in training and morale and one that actually outnumbers them in tanks and artillery.