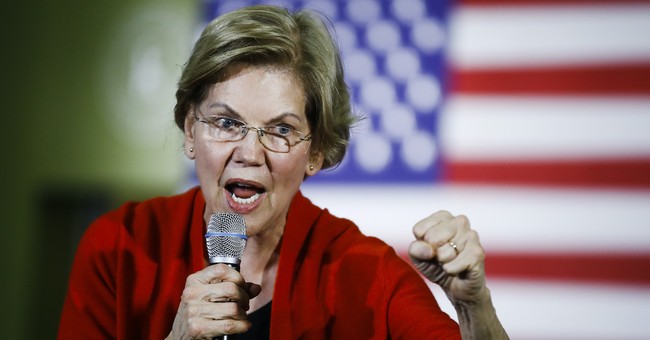 Democrat (Socialist) Sen. Elizabeth Warren (Mass.) has always been a “favorite” left-wing gift that keeps on giving. From her silly Fauxcahontas nonsense to her blistering attacks on billionaires to cancellation of student debt and every other mass wealth-redistribution scheme she can concoct, the clueless “intellectual” is little more than a walking-talking, in-kind campaign contribution to the Republican Party.

So, Warren being Warren, she’s upset with her own party over a reality even she can see: Democrats are going to get their asses handed to them in the November, midterm elections.

But here’s where it gets beautiful. Lizzie isn’t concerned because voters continue to soundly reject the radical-left policies of Joe Biden and the Democrats. Not even close.

Warren is concerned because her party hasn’t done more of exactly why they’re going to lose.

As Fox News reports, Warren warned on “Meet the Press” Sunday that Democrats are going to lose in the midterms if they don’t deliver on “key progressive issues” in the coming months.

We can, for example, stop the price gouging. Let’s authorize the FTC to investigate and prosecute price gouging. That will help bring down prices. [Nonsense; tell Biden to stop killing pipelines and being irrelevant on the world stage.]

Let’s attack the corruption in Washington head on, so that we’re actually saying members of Congress can’t trade in stocks. (Yes.] Let’s cancel student loan debt. [No.] The president has the power to do that all by himself and would touch the lives of tens of millions of people across this country. [That’s it, Lizzie?]

There are things that the American people elected us to do [more accurately, they elected you to maintain the status quo] and we still need to get out there and do it. [If] We do that, then we’re going to be fine at the elections.

[Of course, you will, Lizzie! Now get out there and deliver!]

Warren wouldn’t be Warren if she didn’t take the opportunity to also lie about Republicans, claiming the GOP wants to fight “culture wars” because it is out of ideas on important issues like the economy.

As to the economy, Lizzie, Republicans have “plenty of ideas” — and care a hell of a lot — about out-of-control Democrat spending, runaway inflation, energy independence, a secure southern border, and enforcement of immigration laws.

I don’t normally include long quotes in my articles, but I’m making an exception in the following case to illustrate Warren Unplugged, in all her socialist glory.

And yes, Amazon, I’m looking at you in that one, and other corporations. Look, we need to also authorize the FTC so they can go after companies that are price gouging. And we need to remember that it’s not only what Congress can do, it’s also what the administration can do. Millions of people need their student loan debt cancelled.

Mr. President, today would be a great day to cancel $50,000 in student loan debt for tens of millions of people across this country. My point is that we have nearly 200 days. And not just one negotiation going on, we should have multiple negotiations going on. There is a lot we can deliver for American families, and we need to make that happen.

Like most Democrats — including Joe Biden at the top of the totem pole — Elizabeth Warren continues to incorrectly believe that the 2020 election handed Biden and the Democrats a radical-left mandate on a silver platter. Nonsense, but let’s hope they keep believing it. As I suggested earlier, 2020 was mostly about maintaining the status quo — not radically changing America as we know it.

Biden and the Democrats have clearly shown us they are “full-speed ahead” with their radical agenda and will ride it to the end. That provides a rare opportunity for the Republicans to seize the moment in 2024 and run a smart campaign. While Democrat voters and Republican voters, by and large, don’t change their votes, the party that wins the independent vote in 2024 will also win the White House.

Meanwhile, Fauxahontas will continue to beat her socialist drum until she can no longer lift a defiant fist.