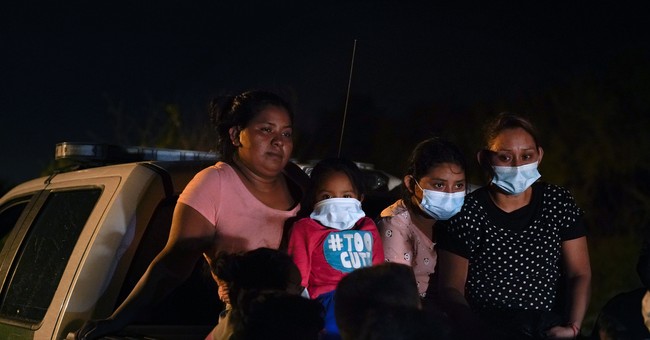 Simple question: If Team Biden truly believes their open-border policy is good for America, why do they continue to try so hard to hide their efforts? Simple answer: Democrats don’t believe illegal immigration is good for America — they never did — they believe it’s good for the Democrat Party.

Case in point, as RedState reported in November, more than 70 air charter flights from the southwest border to Florida had landed at the Jacksonville International Airport in the dead of night, in an operation that had been going on over the course of the summer through September. Why in the dead of night?

The New York Post reported on Saturday the Biden administration has also continued clandestine night-time flights of illegal aliens to the New York City area. Again, Joe, why the secrecy?

Next case in point, as exclusively reported by Breitbart News on Saturday: Top Department of Homeland Security (DHS) officials stepped in “at the last minute” to block a trip by a group of Republican lawmakers to view the U.S.-Mexico border at night — when border-crossers use holes in the (Biden-killed) unfinished border wall to enter the country illegally.

The Biden White House canceled our night trip to the border because they didn’t want my Republican colleagues to see the flood of migrants, drugs, and trafficked children that pass through the gaps in the border wall that this administration refuses to close.

Issa was correct for the same reason those who call out Biden’s middle-of-the-night shuttling of illegal aliens across America are correct. And again, if the hypocritical Democrats and their lapdog media believe their policies are good for this country, why do they go to great lengths to hide those policies?

“They’re trying to control the narrative,” a source told Breitbart News. Bingo. Democrats; it’s what they do.

“Curiously,” the delegation was allowed to tour the border the next day, accompanied by DHS officials who, according to Breitbart, cleared a detention area beforehand.

“They literally cleared out before the congressmen arrived,” a source told Breitbart:

I’m sure the “clean-up” was completely coincidental. Besides, who wouldn’t want to tidy up, a bit, before “company” arrives?

Breitbart noted that the Republicans were taken to “quiet locations” across San Diego, California, sectors of the border, where crossings were not taking place and no apprehensions were occurring.

Sneaky devils, ain’t they? Except, no; no, they’re not.

If I were a Democrat — shudder at the thought — I’d want to hide as much as I could, as well. As RedState reported in late March, even CNN lapdog anchor Brianna Keilar pretended she was shocked when U.S. Border Patrol chief Raul Ortiz told her his agency was gearing up to apprehend as many as 8,000 illegals daily — more than double the daily number of the 2019 surge under the Trump administration. While Border Patrol has, at times, apprehended 8,000 migrants daily, the number has never been the norm.

It’s about to get worse. Way worse.

With Biden hellbent on allowing Title 42 to expire on May 23, as reported by RedState, DHS gave reporters an estimate that up to 18,000 illegals could be apprehended at the border every day if it happens. The more troubling part is the number of illegals who will evade apprehension as the daily surge increases to numbers previously unheard of.

Then again, everything the Democrat Party supports or opposes, proposes, or rejects can be linked to the ballot box with no more than two dots. Including blocking a group of Republican lawmakers from seeing Team Biden’s lies in (in)action, firsthand.