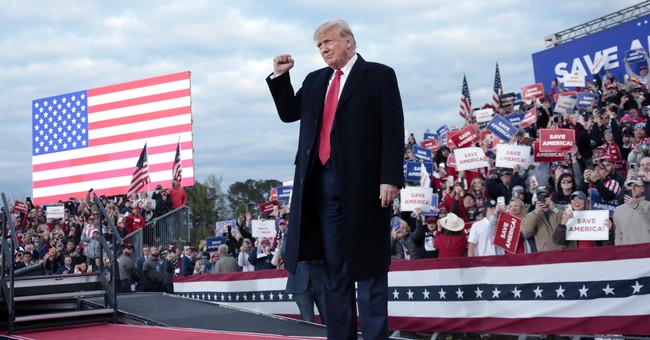 Donald Trump held a rally in Delaware, OH, on Saturday evening, prompted by his recent endorsement of J.D. Vance in the state’s coming GOP Senate primary. But while Vance may have technically been the man of the hour, the former president was the highlight, playing his greatest hits but also leveling some hilarious comments on Joe Biden.

One of the best moments included a mention of the Easter Bunny, while rounding out into a very effective critique of what the Biden administration has done to the country. Here’s what that sounded like.

In more sane times, you’d assume that Trump was just joking. I mean, there’s no way the current president actually tried to shake hands with thin air and was herded like a cow by the Easter Bunny in an attempt to shield him from reporters, right? Unfortunately, we don’t live in more sane times, so both those things actually happened. Biden is writing Trump’s material for him.

Still, you can bet those statements will be “fact-checked” in another weak attempt to protect the current White House resident. Heck, Politifact has already done the work, claiming that Biden was “pointing at the audience behind him with his whole hand.” You know, because that’s something people do.

Everyone reading this is welcome to go watch the video for themselves and come to their own conclusion. What I do know is that Politifact does not have any special insight into what Biden was doing or thinking at the time. Rather, they are coming to a conclusion that fits their preferred narrative — based on exactly the same amount of speculation as those who see him shaking hands with thin air.

But I digress. Getting off that tangent and back onto the Trump rally, the president also shared a story that I think highlights one of the best things about his presidency.

Trump tells the story of a meeting he had with the Mexican president before the United States had hammered out the “Remain in Mexico” agreement that Biden has now sought to nuke (with disastrous, deadly consequences). In typical comedic fashion, the former president riffed about the interaction, noting that the Mexican president was non-cooperative at first, specifically in regards to deploying Mexican forces to help. In the end, Mexico caved, allowed “Remain in Mexico,” and did deploy troops. According to Trump, that came after he threatened crippling tariffs.

Why is that story impactful? Because it’s the antithesis of how the mediocre, careerist hacks at the State Department normally operate, and Biden’s ascension to power has brought a return to the status quo. Ask yourself, how has that worked out? Would anyone else prefer Trump’s hard-nosed style to the current administration breaking records for illegal immigrant crossings? That seems like a pretty easy choice, if it were being offered.

It’s not, though, and the country is stuck with Biden and his horrible, nonsensical policies for nearly another three years. When you say it like that, it sure is depressing.