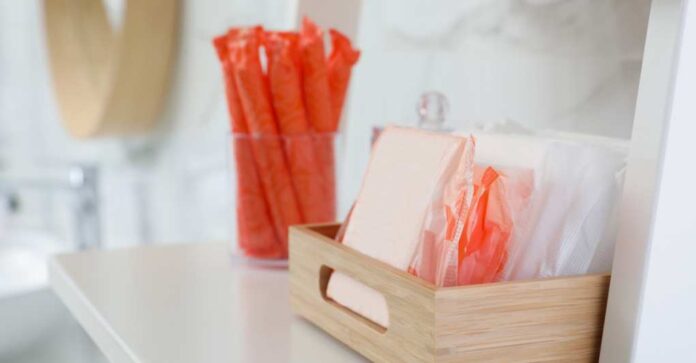 Let’s be clear. As much as people want to say otherwise, the only people who are capable of menstruating are biological women.

Transgender women are those who used to be men but now “identify” as women. They like to pretend as though they menstruate once a month because it helps them to feel more like the gender they want to be.

Transgender men are those who used to be women but now “identify” as men. Many of these individuals have not gone through the change to the fullest and, therefore, still menstruate.

We’re talking about less than one percent of the population in the United States.

Yet, that’s not going to stop California – and more specifically, UCLA, from catering to the transgender community. They’ve been catering to the minorities for years, so why stop now?

Governor Gavin Newsom signed a bill that would require public schools and colleges to provide free menstrual products. UCLA has gone above and beyond by equipping its campus bathrooms with complimentary menstrual products before the 2022-2023 school year.

As the school paper, Daily Bruin reports, “As the first institution in the University of California system to provide free menstrual products, UCLA is stocking them in more than 50% of restrooms – above the amount recommended by the bill.

The paper goes on to say that “the university is providing these products in men’s, women’s and gender-neutral restrooms.”

Are you confused yet? Good, so are we.

So, UCLA’s liberal student body thinks that they are doing the campus a favor by offering menstrual products. For all of the biological women out there, it’s great news. It can ensure that the necessary products are readily available during that time of the money, and without any kind of added expense.

A transgender male is most likely going to use a gender-neutral restroom. That means that the average person using a men’s restroom is a biological male. Placing pads and tampons in that bathroom is not going to provide any real benefit.

They may shove them in their pockets to take home to their girlfriend. They may even launch a few tampons at their friends at the fraternity. Stocking them, however, is a waste of money – and it only confuses the issue of gender even more than it has already been confused.

Most of the reasoning for Newsom passing the bill was so that students in public schools could have access to free menstrual products. These are for the low-income families who can’t afford to take care of their middle or high school students when puberty hits.

Students at UCLA are adults, for the most part. They are living on their own, attending a higher education institution, and should be more than capable of taking care of their menstruation products. There’s no need to embarrass biological men by placing a basket of tampons near the sink. It will only confuse them, causing them to run back out to look at the sign on the door. After all, if biological men are using the restroom dedicated to men, they shouldn’t need a product that is only useful if they have a uterus.

It really begs the question of what’s being taught over at UCLA. One student by the name of Tayloneei Jackson said “It was important to ensure the university would prioritize inclusiveness and supply all bathrooms, including men’s.” This student is a fourth-year human biology and society student. Biology class should be teaching them that a men’s bathroom wouldn’t need tampons.

Another student explained, “Individuals who do not identify as female can also menstruate and need access to these products in their respective bathrooms.”

And there you have it, folks. The complete collapse of common sense and society as a whole.