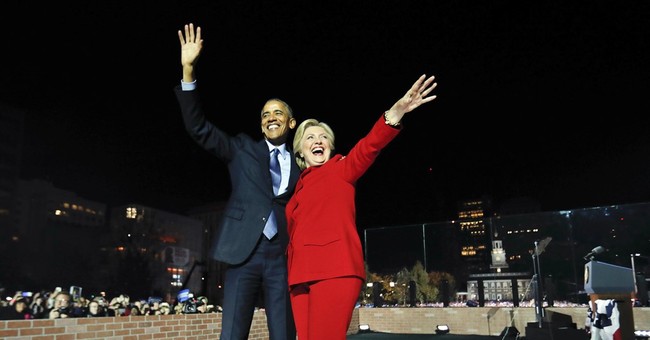 Elon Musk is pushing for free speech on Twitter. Democrats, of course, are on the wrong side of the issue, pushing for more tech and government control against “disinformation” in media. What’s kind of ironic is that you have two of the biggest pushers of disinformation out there — Barack Obama and Hillary Clinton — speaking out over the past couple of days on the issue, and leading the charge with the argument that disinformation is somehow a threat to “democracy.”

My colleague Jerry Wilson hit on some of what Barack Obama had to say in his disinformation speech at Stanford.

I wanted to highlight one aspect of what Obama said, because he says the quiet part out loud here. It’s about control, and they want that control.

“TV is a tool,” Obama declared. “The internet is a tool. Social media is a tool. At the end of the day, tools don’t control us. We control them. And we can remake them.”

We saw how that “control” interfered in the election in 2020, when Twitter and other social media suppressed the story about the Hunter Biden laptop scandal. They don’t want to lose that ability to control the narrative because if they do, it will also affect their ability to hang on to power. They want to be able to censor their political opponents.

“For too long, tech platforms have amplified disinformation and extremism with no accountability,” she claimed. “The EU is poised to do something about it. I urge our transatlantic allies to push the Digital Services Act across the finish line and bolster global democracy before it’s too late.”

So, in addition to the guy who lied to us and told us that we could keep our doctor, we now have Hillary Clinton trying to tell us something about disinformation. Does she mean like this little piece of disinformation, part of the false Russia hoax that the Clinton team helped to pay for and spread to the media and the FBI?

What great harm that hoax caused. Has she checked what’s happening with the Durham probe lately, the people who are flipping, and her campaign’s claim of privilege in the case (which tends to prove that yes, the lawyer was working on her behalf to smear President Donald Trump)? How about the fine that she incurred from the FEC for not telling the truth about the funding behind the Steele dossier?

Hopefully, there’s more “accountability” for the disinformation that Clinton spread. This takes some kind of nerve from Hillary. Notice her concern here isn’t freedom of speech or the Constitution; it’s protecting “global democracy.” That’s what it’s about, not preserving people’s rights or the free flow of ideas.

But these are the people who want to control our information hubs and dictate what we see. Because they know if people see the truth, they all would be out on their ears.