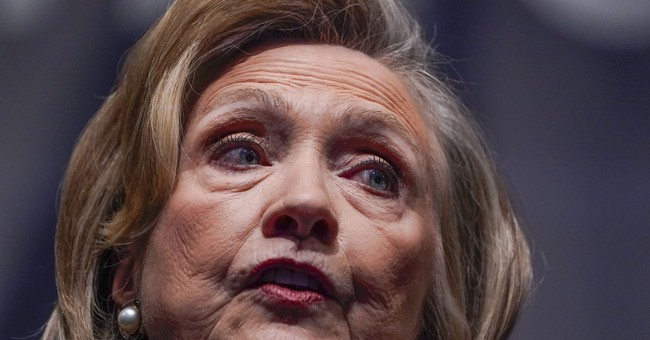 While Hillary for America moves to undercut John Durham’s criminal investigation of the Trump-Russia hoax, there’s another legal action taking place on the civil side of things.

As RedState previously reported, Donald Trump recently filed a lawsuit against everyone and their mother over the “unthinkable plot” to bring down his campaign and his eventual presidency by spreading false conspiracy theories about Russian collusion. Defendants in the suit include Hillary Clinton, the DNC, Perkins Coie, Michael Sussmann, and Marc Elias, among many others. All of those people and entities appear to be in the sights of Durham as well.

Now, Clinton is moving to cut Trump off at the pass, with her attorneys filing a motion to have the lawsuit dismissed. In it, they accuse the former president of using the court as a fundraising gimmick.

Clinton’s attorneys said Trump’s $24 million lawsuit that claims an “unthinkable plot” to “cripple” his bid for the presidency and paint his campaign as colluding with Russia had no legal basis, according to a motion filed in US District Court for the Southern District of Florida.

“Whatever the utility of Plaintiff’s Complaint as a fundraising tool, a press release, or a list of political grievances, it has no merit as a lawsuit and should be dismissed with prejudice,” the 22-page court filing said.

In perhaps a telling admission, one of the chief arguments in the filing is that Trump waited so long to file the lawsuit. At one point, Clinton claims that the statute of limitations for the former president’s RICO claims (the basis of the lawsuit) had passed. That may actually be true depending on what start date you use, but it’s hard to say exactly when the time period would have begun.

Another part of the filing involves the theft of “trade secrets.” Yet, Clinton argues that the information taken from Trump Organization computers doesn’t qualify as such but was simply “speech with which he disagrees.” Lastly, Clinton claims that Trump has not established she actually took part in any of the alleged conspiracy laid out in the lawsuit.

It’s very typical for Hillary Clinton to try to avoid all responsibility for her actions. Whether it can be proven in court or not, it’s extremely obvious that she was behind the plot to spread false information to garner a government investigation of Donald Trump. The idea that she was just paying Perkins Coie for “legal advice” and that Christopher Steele just made the dossier on his own while Michael Sussmann went to the FBI of his own prompting doesn’t begin to add up.

Yet, the failed Democrat is certainly one to cover her tracks, and it will be difficult for Trump to win his lawsuit. There is also a very real possibility, depending on who the judge is, that she could win her request for dismissal. We’ll have to see how that goes. I wouldn’t hold my breath for justice in this case. Even if John Durham succeeds in taking down some of her lackeys, you can bet Clinton has fully insulated herself.