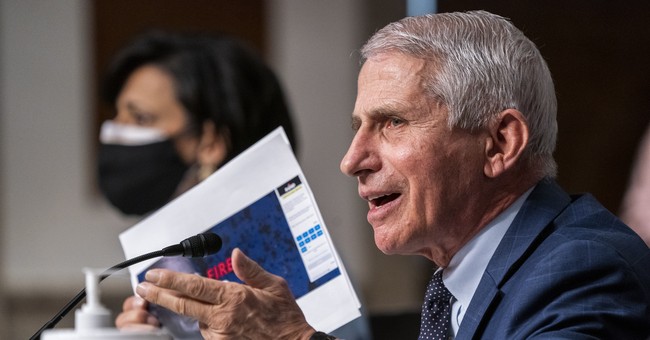 Dr. Anthony Fauci has recently begun to make public appearances again. That came after a several-week span where it looked as though the Biden administration had sidelined him. Yet, with more variants to fear-monger about the probable summer wave coming (because COVID-19 is clearly endemic and seasonal), the good doctor is back on the scene, and he’s as ridiculous as he ever was.

But when does being ridiculous cross over into being dangerous? That’s probably a question that should be answered after Fauci’s latest commentary, this time on the CDC mask mandate being struck down. Astonishingly, when asked about it, he asserted that the CDC should not be subject to the court system when it comes to “public health” decisions.

This little tyrannical gnome keeps managing to one-up himself. Imagine thinking that a government bureaucracy should operate as an all-powerful entity completely unbeholden to the court system and voters. What’s the limiting principle there? What couldn’t the CDC do under that kind of governmental arrangement? The answer is obviously nothing. They could quite literally outlaw or mandate anything they want. Without the courts to operate as a check on their power, there would be no recourse at all if they violate the Constitution.

Yet, this is exactly how Fauci thinks. His worldview is based wholly on the idea that “experts” exist on a plane above mere normals, able to dictate to others via appeals to authority. Of course, these “experts” rarely have to show their work, and they certainly never admit when they are wrong. They just “are,” and if you disagree with them, you will be accused of wanting to kill grandma.

I think most Americans are sick and tired of being treated like peons by an elite class that couldn’t strategize its way out of a wet paper bag. Fauci is objectively a failure. He’s been a failure going back to the AIDs outbreak in the 1980s. That he’s the highest-paid member of the US government makes things even worse. There has never been a better example of government mediocrity and the tendency to fail up than Fauci.

We should all be thankful we do live in a system where the CDC can’t run wild and Fauci can’t live out all his dictatorial dreams. Because don’t kid yourself — he absolutely would if he could.