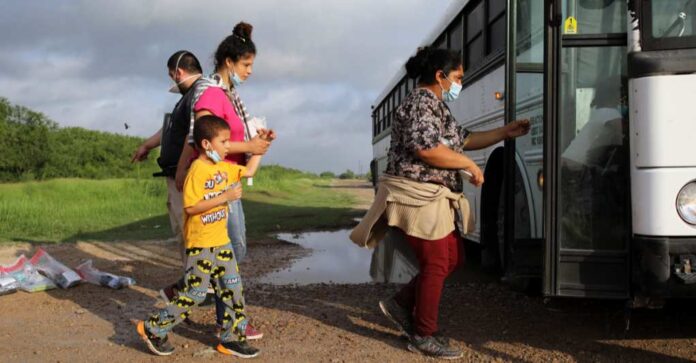 Don’t mess with Texas…Republican Governor Greg Abbott delivered on his showdown over immigration. The first busload of undocumented migrants arrived in the nation’s capital on Wednesday. This is a definite follow-through on the governor’s strategy to oppose the White House administration’s rescinding of the border policy from President Trump’s administration.

Abbott announced last week that he was telling the Texas Division of Emergency Management (TDEM) to transport migrants released from federal custody in Texas to Washington, D.C., and some other locations outside of Texas.

Governor Abbott said in a statement, “By busing migrants to Washington, D.C., the Biden Administration will be able to more immediately meet the needs of the people they are allowing to cross our border.” He noted that another busload should be arriving soon.

The passengers on the bus were from the Del Rio sector in Texas and had come from the nations of Columbia, Cuba, Venezuela, and Nicaragua. They were dropped off between Union Station and the Capitol. They were checked by officials and had the wristbands they were wearing cut off. Then they were told they could go.

This is exactly what Abbott said he would do when the Biden Administration decided to stop Title 42 expulsions.

This action should bode well for Abbott, who is running for re-election in November. He gave directions to the Texas Division of Emergency Management to charter the buses and drive the migrants to D.C. He claimed that Texas should not be responsible for “bear the burden” of the Biden Administration’s “failure to secure our border.”

Jen Psaki, the White House press secretary, said at a press briefing that the people coming into D.C. have all been processed by U.S. Customs and Border Protection. She said somewhat sarcastically that it was nice of the state of Texas to help them get to their final destination while they wait for the immigration proceedings to finish.

This all began as Alejandro Mayorkas, the Homeland Security Secretary, announced that Biden’s administration was planning to stop the Trump-era public health rule known as Title 42. The United States has embraced this rule since the spring of 2020 to stop the spread of COVID-19. It prevented immigrants from crossing the U.S.-Mexico border to claim asylum. This policy is going to be lifted on May 23, even though it has successfully kept more than 1.7 million immigrants from crossing the border during the pandemic.

The DHS has given the warning that there could be more than 170,000 migrants when Title 42 is lifted.

Psaki did say, about Abbott’s bus plan, that she did not know under what authority he could send busloads of migrants to Washington. She said that it was pretty clear that it was a publicity stunt. She said that Abbott’s own office “admits that a migrant would need to voluntarily be transported and that he can’t compel them to. Because again, enforcement of our country’s immigration laws lies with the federal government, not a state.”

Abbott spoke like a Texan when he demanded that his people deserve an “aggressive, comprehensive strategy to secure our border—not President Biden’s lackluster leadership.”

He closed his statement to the press with, ”As the federal government continues to roll back commonsense policies that once kept our communities safe, our local law enforcement has stepped up to protect Texans from dangerous criminals, deadly drugs, and illegal contraband flooding into the Lone Star State.”