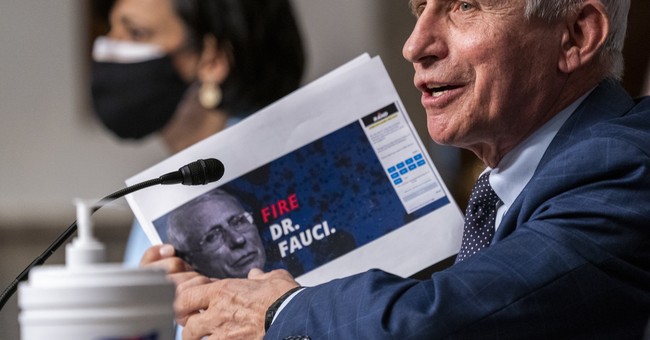 Anthony Fauci, the face of lockdowns, and COVID variants, and masks, and biolab funding, is still talking about variants and still denying there’s a pathway to natural immunity, and his continued presence on the nightly news is becoming something of a nuisance. More than a few Americans would doubtless like to see Fauci face some sort of comeuppance for his role in the last two torturous years of their lives.

So what happens if Republicans win big in November during the midterm elections — which they are expected to do — and Congress gets serious about looking at the regulatory authority of the CDC and investigating how the pandemic, lockdowns, national security, and economic upheaval are linked.

According to Republican Sen. Chuck Grassley of Iowa, Fauci will take the coward’s path and simply resign. Annoying, right? But take heart: Grassley says Fauci’s not the biggest fish that needs frying.

At his third public town hall meeting in as many days, Sen. Chuck Grassley speculated that Dr. Anthony Fauci will resign rather than face a Senate Health Committee chaired by Sen. Rand Paul.

“You ought to see Dr. Paul fighting with Dr. Fauci, right on television and making a big deal out of it,” Grassley said in response to a man who questioned who runs the CDC and why they made their pandemic recommendations. “I bet you if Senator Paul becomes chairman of that committee, that Dr. Fauci will be resigning. He won’t want to put up with that, to get the truth.”

Paul has already promised an investigation of Fauci and the National Institute of Health. Grassley echoed many of Paul’s concerns about Wuhan lab funding during the forum in Burlington this morning.

“I think you ought to be more concerned about the NIH … giving money to the Wuhan lab in China, that’s what we’re most frustrated about,” Grassley said. “And if there’s a change in Congress … there’s doctors like Dr. Paul of Kentucky, he’s already said if he gets to be chairman of the Health Committee, he’s going to investigate Dr. Fauci, he’s going to investigate the CDC. And try to make some clarity, where does their authority begin and end?”

Sen. Rand Paul of Kentucky did, indeed, promise an investigation into Fauci and the NIH back in February. From The Hill:

“If we win in November, if I’m chairman of a committee, if I have subpoena power, we’ll go after every one of [Fauci’s] records,” Paul said during an interview with conservative podcast host Lisa Boothe. “We’ll have an investigator go through this piece-by-piece because we don’t need this to happen again.”

Paul has alleged on numerous occasions that Fauci and the National Institutes of Health (NIH) sent funding to a virology lab in Wuhan, China, that then created a supervirus that can infect human cells. He has pressed Fauci on the theory that the novel coronavirus was created in the Wuhan lab and then somehow escaped, either because of an accident or because it was deliberately released.

Perhaps Fauci’s resignation will satisfy a nation numbed by COVID restrictions and the constant fear of new variants that punctuated the last two years. And perhaps it should. Fauci — squirmy little bureaucrat that he is — is by no means the mastermind of what happened during the pandemic of 2020-2021. He’s simply a player, and one that should be questioned in an effort to get at the source of what happened. And that source, as difficult as it is to admit, is going to require a much bigger fix than Fauci finally walking away from public health. It’s going to involve a real look at the regulatory power of agencies, and at how (and what kind) of research is conducted in foreign nations.

And those will be hearings to pay attention to once Fauci has left the building.