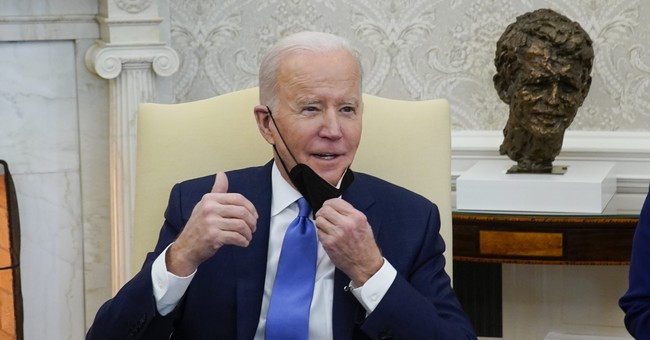 Earlier on Tuesday, news broke that the Biden administration had decided not to appeal the ruling from a federal judge in Florida that found the CDC’s mask mandate on airplanes, trains, and other forms of transportation unlawful.

But because Joe Biden’s presidency is the most incoherent in American history, it took only a few hours for his handlers to reverse course. Now, it has been announced that the DOJ and CDC will appeal the ruling. That comes after the CDC determined the mandate is still “necessary.”

Note that the DOJ will not seek an emergency stay on the ruling, which means this will drag out for months before any possible victory for the administration is secured. That means that you will have maskless flights going on well into the summer before the CDC likely attempts to reinstate the mandate. How well do you think that’s going to go over with most Americans?

This move strikes me as political suicide. What is there to be gained by dying on this hill? The mask mandate for airplanes and trains is pointless scientifically because of the filtration systems present. We are also firmly at a point where the vast majority of Americans are “over” COVID-19. They do not want to be subject to pointless mitigation any longer. To continue to force this lunacy on them is going to only grow the electoral backlash set to arrive in November.

Also noteworthy is that Biden himself said earlier today that mask-wearing should be up to the individual. Yet, his handlers contradicted him multiple times.

Has it ever been more clear that Biden isn’t in charge of his own presidency? Nothing he says matters, and those who ostensibly work for him don’t even bother to keep a pretense of coherence anymore. They just do whatever they want while grandpa Joe wanders around and says stuff.

Back to the political realities of this, though, this is a lose-lose for the administration. Think about it. Either they win their appeal months into the summer, reinstating the mask mandate right before the mid-terms, or they lose another high-profile court case, suffering a huge embarrassment and rebuke prior to the mid-terms. Yet, with those two possibilities staring them in the face, the White House has said, “Yeah, that sounds like a great plan.” It’s hilarious to watch, but mind-numbing all the same.

Lastly, I’ll be curious how the airlines respond to this. Several airline CEOs have openly said the mask mandate is pointless. Will they finally grow a spine if it gets reinstated, refusing to enforce it? Or will they continue to allow their passengers to suffer to the detriment of their own businesses? I guess we’ll find out.