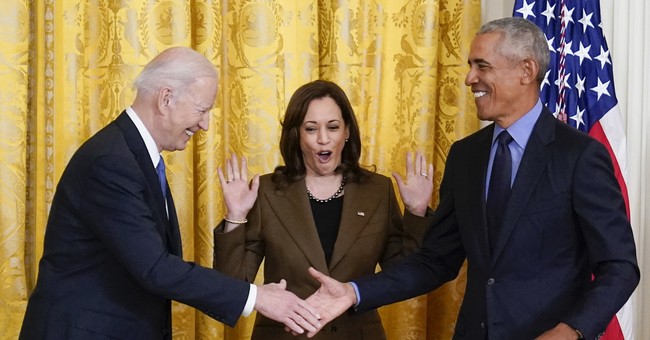 To this point, Joe Biden has danced around the idea of running for a second term. His handlers have indicated that he plans to while leaving the door open for other circumstances to arise. When the president himself has spoken on it, he’s been even vaguer, mentioning his health and suggesting that Donald Trump possibly running again would be a deciding factor. A firm commitment has been largely elusive.

According to The Hill, though, Biden has committed to staying in the game. The president made those comments to Barack Obama during the latter’s recent White House comeback tour.

President Biden has told former President Obama that he is planning to run for reelection in 2024, two sources tell The Hill.

The admission to Obama is the latest indication that Biden is likely to run for a second term, something the president has spoken about publicly.

During a press conference in Brussels last month, he told reporters he’d be “very fortunate” to run against his rival in the 2020 election, former President Trump…

I wonder who brought this up? Was it Obama fishing for whether Biden was delusional enough to think he could run for re-election with a probable sub-40 approval rating at 82-years-old? Or did the current president share his delusion voluntarily, continuing to believe he’s got some special power when it comes to “beating” Donald Trump?

What if Trump isn’t the GOP nominee, though? Will Biden bow out gracefully? The problem is that he can’t know who the nominee will be until the primary season is over, which means he will have already committed himself to the general election. Given that, all this obsession over Trump is bonkers. It’s letting a factor dictate a decision that can’t be known until after the decision has to be made. Further, the idea that the 2024 election will once again be a referendum on Trump and not, you know, Biden’s failed presidency, is galaxy-brain stuff.

Either way, it’s insane to think that a guy who has to be herded by the Easter Bunny and told when to wave by his wife is going to actually run a presidential campaign in two years. Yet, nothing about Biden’s current situation says he’s a rational actor, so I suppose it’s not that crazy that he’d think he’s capable of giving it another go despite his senility.

But then there’s the other side of this, which is that the Democrats don’t have much choice. Biden, even as an upright corpse, outpolls Kamala Harris, who is perhaps the most unlikable, ill-prepared major politician in modern history. Somehow, she makes Hillary Clinton look charismatic. Democrats are stuck with Harris, and if they pinch hit her for Biden, they know defeat is all but certain.

The final question is how Harris reacts. Will she sit idly by, or will she start a war behind the scenes to get Biden out of the way? I’m going with the second choice. The vice president has already shown a penchant for battling the White House, after all.

No matter how this plays out, it’s going to be fun to watch. The Democrats are in one of the worst political situations in decades. That will manifest first in 2022, but the years after don’t promise to be any better for the Biden administration and his party. That a will-be 82-year-old man with clear signs of dementia is actually committing to run for re-election to the highest office in the land is just hilarious…and nuts.