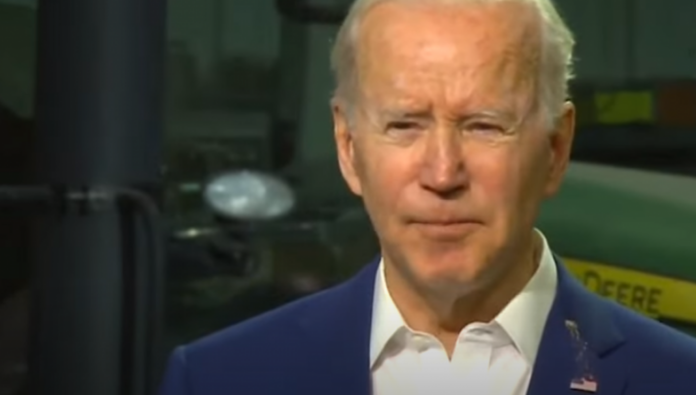 The White House staff has to work overtime cleaning up the mess that Joe Biden has once again created for himself. The old man appears to have been pooped on by a bird in pictures of him given his latest speech of lies. His advisors and staff could have cleaned the man up, but instead, they left the poop on his clothing for the world to laugh at.

Biden spoke in Menlo, Iowa, about lifting the restrictions placed on gas with ethanol. He was trying to get across that he was working on the high gas prices. So far, the president has only ignored the one action that would lower prices at the pump. He needs to open up domestic drilling within the United States.

Biden still blames high gas prices on the Russian war. He keeps telling people that the gas prices were not high until the war started. But the truth is that the prices were already going up because he shut down all the domestic production sources and placed America on the foreign oil plan.

Vladimir Putin has nothing to do with the high gas prices in America. Joe Biden is the sole cause of the absurd amount of money people pay for gas. It seems only fitting that a bird poops on the president’s jacket to get the point across that people are sick and tired of dealing with the poop he is making people wade through every day.

Biden claims that the “70 percent of the increase” is Putin’s fault. But that is just another liberal way of shifting the blame. People have been paying extremely high prices on every consumer product for the past year. Biden’s new bills and taxes have made it impossible for people to save money and pay off their bills that stacked up after the pandemic disappeared.

The Democrats wanted to get a sneak peek into private bank accounts for some time. Biden even tried to get the IRS to have access to accounts so they could spy on people to make sure they were paying all of their taxes on cash that they might have failed to report. But his idea was so unpopular that he let it fade into the darkness.

His new idea is to inflate consumer prices so much that people do not have a chance to enjoy the money they earn, and they are forced to pay it to the government in the form of higher taxes and prices.

Biden is a puppet for people to use for their agenda pushing. The Democrats need him out on the road making speeches about what he plans to do to solve the gas problem. Any person who listens to his lies will notice that he pretty much says the same thing repeatedly. He says it so much that the bird had to poop on him to show how tired it was of hearing his lies.

The White House tried to save face by declaring that the poop dropping was a piece of corn. But corn would have blown off in the wind, and where there is one piece, there is bound to be more floating around. The problem with their statement is that there was no corn found in the air. It was a bird that decided to poop on the president.

The president failed to mention that corn prices are also on the rise. Not only is the president lying about the gas prices, but he is also lying about how his plan will help lower the cost of gas. High corn prices will only make ethanol-based gas expensive. The bird might as well have been flying around telling people not to believe the old man and think for themselves.

Even if the poop was supposedly the corn the White House claims it to be, it’s still a problem. The fact that no one went and took care of it is concerning. Biden was clueless to realize it was on his jacket. And the people could have cared less about him and the professional look that a president should have at all times.