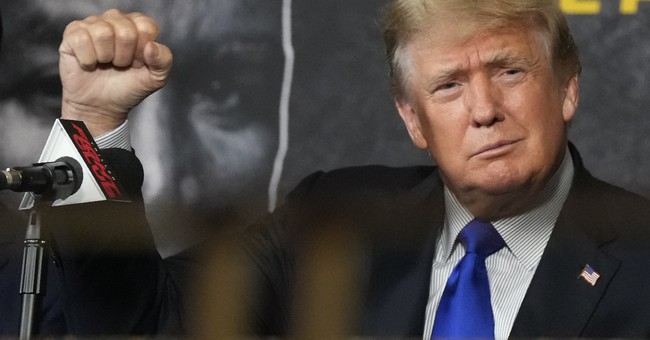 As should be the case with every honest, at least reasonably intelligent person in America who pays a modicum of attention to politics, MSNBC appears to be fully aware that the November midterm elections are going to be a disaster. How can I put this? It’s a beautiful thing to see.

Cross hooked up with Democrat strategist Terrance Woodbury on Monday to discuss the party’s prospects for the November midterm elections. After much clutching and gnashing of teeth, the Democrat duo agreed: “We have to put Trump on the ballot” in November.

Cross, sounding completely worn out by the knowledge of the coming dumpster fire, kicked off the festivities with Woodbury by blatantly flying wingman for the Democrat Party.

People are exhausted, and Terrance I’ve looked at a lot of the data … the strategies… you talk to a lot of younger voters but you also talk to voters across the spectrum. Do you feel that sense of urgency from voters this time around? Or are people like exhausted and wipe the sweat from their brow and they are not planning to participate?. What’s your take?

Stop the tape. “People”? “Voters”? Nonsense, Tiffany. Democrat people. Democrat voters. At least be honest. Hell, even the most Trump-diehard of Fox News hosts at least refer to Republicans and Republican voters instead of ridiculously trying to sound objective.

As is always the case on MSNBC and CNN, Woodbury caught the softball set-up and was all over it:

That’s exactly right, Tiffany. Morale is extremely low amongst the Democratic coalition. [See: “Joe Biden.”] We are seeing cynicism and frustration [See: “Lyin’ Biden”] with a perceived lack of progress on the progressive agenda. [See: “The worst president in at least modern history.”]

And the truth is Democrats have made significant progress [complete and utter nonsense] on issues most important to Democratic base [wrong] but they are not telling that story. [Because that story is a lie.]

The multiracial coalition, the surge that you spoke of in 2018, and that came back out in 2020, what united that surge was an anti-MAGA, anti-Trump, anti-racism sentiment [falsely whipped up by the Democrat Party] that really started to bubble up in the summer of 2020.

We have to put Trump back on the ballot [so they can lie their asses off, again (still)], but that does not mean that we get to make every Republican seem like Trump. [Wanna bet they won’t try to do just that?]

It means that we have to literally [ignorant useage of the term] explain that if Republicans win the House and the Senate in 2022, they will reinstall [ROFL emoji] Trump in 2024.

So, the Democrats “have to put Trump on the ballot” in November. As hilariously as the strategy is, the reason is even more hilarious.

If our intrepid president’s “accomplishments” have been as effective and plentiful as he and Nancy Pelosi claim — there have been zero; to the contrary — why didn’t Woodbury advise that every Democrat on the ballot in November run on Joe Biden’s record? Because it has been a disaster from day one and has only gotten worse.

The other reality is Stage Four Trump Derangement Syndrome continues to run deep in minds of a party that mistook the 2020 election as a “mandate” to radically change the very fabric of America — for which it continues to pay a disastrous price — when, in reality, the election and its results were about “It ain’t broke, don’t fix it,” despite the Democrats’ protestations to the contrary.

Meanwhile, the midterms await. With or without Trump “on the ballot,” a good old-fashion ass-kicking awaits Nancy and the House Democrats, and hopefully Chucky Schumer’s Senate Democrat majority. As to Joe? Will we see you in 2024, “Big Guy”? Let’s hope so.

As to Tiffany Cross “looking at a lot of data”? Please.

Trump Making His Presence Felt in Lead-up to Midterm Elections

MSNBC Panics About Midterms as Inflation Looks to Get Even Worse