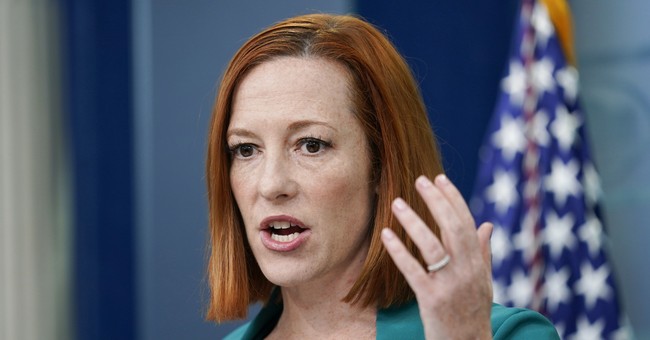 Per RedState’s prior reporting, a federal judge in Florida struck down the CDC’s ridiculous travel mask mandate that applied to airplanes and trains, among other modes of transportation. Recently, the Biden administration had extended the mandate for another two weeks, leading to more questions about how much they are willing to ignore hard facts to push a political narrative.

As expected, the White House’s response was one of petulance. Jen Psaki took to the briefing podium to lambast the decision and act like a child when questioned on the necessity of the mask mandate. Of course, it was Fox News’ Peter Doocy who challenged her, while other reporters fed into the administration’s premise. It’s Doocy vs. the world at this point.

Why? Why is it disappointing? Making two-year-olds wear masks on a plane should not be something anyone actively revels in, yet it appears that the White House is upset that they can’t torture little kids anymore. Holding such a position is insane and beyond contempt.

Moving onto the snarky answer to Doocy’s question, the idea that one must be a doctor to ask the government to justify its abuse of power is dangerous and tyrannical. I know that sounds somewhat overwrought, but it’s true. The Biden administration actually believes they should be able to do whatever they want, and if you dare to ask them to show their work, they will make false appeals to authority. That’s not freedom. That’s not “democracy” — something the left is constantly whining about.

It is not a secret that airplanes are one of the safest places to be when it comes to COVID spread because of the filtration systems. To allow a maskless environment in the White House but demand people still be muzzled on planes is to spit in the face of logic and reason. It’s anti-science and a complete affront to basic liberty.

Further, the media continue to play into this nonsense, refusing to hold the White House accountable.

What in the world? So their argument is that we should keep an illegal mask mandate in place that is doing nothing whatsoever in regards to COVID, in order to stop planes from…becoming fight clubs? Who is going to get violent because others decide to ditch their masks? Some wildly liberal, quadruple-vaxxed Karen who is irrationally fearful of the coronavirus? If so, then they are the problem, not people who just want to breathe, and they should be removed from their flights.

It’s gotten so tiring to see the administration respond this way, anytime they don’t get their way. They refuse to speak plainly to the American people while demanding ultimate power. Thankfully, Trump’s judicial appointments have been a thorn in the White Houses’ side, and a well-deserved one at that.