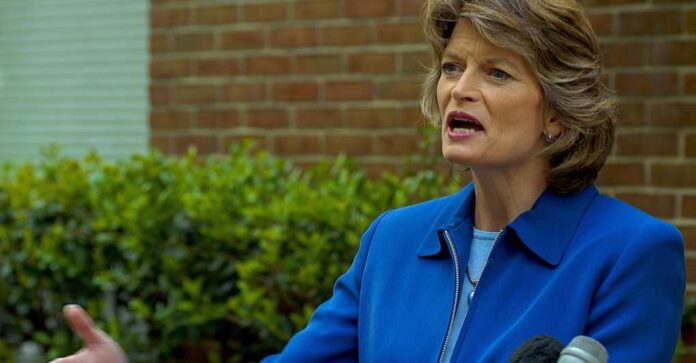 Bad apples, that’s what we call the people who, in a field of usually good people, turn out to not be so good. Unfortunately, there are a few in the Republican Party and more specifically, those in Congress. They are those that, despite claiming to be for the people and against big government, have time and time voted for policies, ideas, and leaders who would seek to do the exact opposite.

You know, people like Senator Lisa Murkowski of Alaska.

As you likely know, she is one of a few bad apples who chose to vote against former President Donald Trump during his second impeachment trial, apparently believing that he had committed impeachable offenses, including inciting violence and insurrection.

At the time, she made a statement saying, “By inciting the insurrection and violent events that culminated on January 6, President Trump’s actions and words were not protected free speech.”

Of course, she only chose to be this bold and harsh after Trump had already been voted out of office and had even officially left the White House. It is noted that Murkowski waited until February before saying such.

Now, we all know that Trump didn’t incite anything, except that Americans come “peacefully and patriotically” to the Capitol to “make your voices heard.” There was no mention of storming The Hill or destroying federal property, and certainly not a hint of wanting violence.

It is also worth mentioning that in Murkowski’s home state, Trump led Biden by double digits in the 2020 election, just mere weeks before this vote took place.

But, not for the first time, Murkowski chose to side with the Democrats, apparently believing that they and not her constituents back home or the American people were what really mattered. And given the fact that she has continually made decisions like this, there is a growing number of people both nationally and in her home state who believe her time in Congress is up.

Naturally, Donald Trump is one such individual. And that’s precisely why he has chosen to support incoming Alaskan senatorial candidate Kelly Tshibaka.

As Tshibaka says, “Everywhere I have been in Alaska over the past year, people have told me the same thing: It’s time for a change.” And that’s precisely why she’s decided to run against Murkowski in this year’s November midterms.

She explained that it didn’t matter who she talked to, whether young or old, rich or poor, white or black, unemployed or working, they all want Murkowski gone.

Well, as Tshibaka explains, the people of Alaska are tired of being ignored and forgotten by not only one of their own but by someone they trusted to be their voice in our nation’s capital. Instead, Murkowski seems to care “more about her popularity among the Washington, D.C. elites.”

And her vote against Trump in 2021 is not the only bit of proof.

Take her recent vote to confirm liberal loved Judge Ketanji Brown Jackson to the Supreme Court. Despite the rest of her party voting against Jackson and her controversial sentencing record, Murkowski and the few other usual bad apples (Susan Collins of Maine and Mitt Romney of Utah) voted to put her on the bench.

Similarly, she was the only GOP member to vote against Brett Kavanaugh’s confirmation back in 2018.

But, as I said before, it’s not just America as a whole she has voted against. In the past years, she’s also voted against her home.

In March of 2021, she was one of only four GOP senators to confirm the liberal Deb Haaland as the Department of the Interiors’ secretary. Haaland, if you aren’t aware, is the one who has since made it possible to shut down all oil drilling in the Arctic National Wildlife Reserve in Alaska, as well as put a stop to all new and expanded leasing and development plans for the National Petroleum Reserve in Alaska.

The Trump administration permitted both wilderness areas to begin oil drilling and/or production in part. But despite seeing oil and gas production fall to a 43-year low in 2020 and now having those same oil and gas prices skyrocketing, Haaland has refused to consider the benefits of amending her decision.

In addition, Murkowski also voted against the repeal of Obamacare, again siding with the Democrats.

As Tshibaka says, votes like these prove Murkowski is no longer for Alaska but herself. And it appears both the Alaska Republican Party and Trump agree. Come November, odds are she’ll find herself without a job as a result.