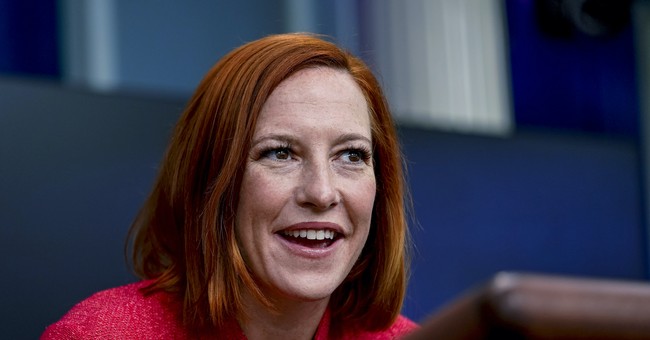 White House Press Secretary Jen Psaki seems to be tossing aside any pretense of honesty or ethics as she prepares to jump off the sinking Biden ship and flee to MSDNC. Her lies over the past month have hit a new level for how obvious and bad they are. It’s as if she doesn’t care anymore.

As we reported, she remarked on Fox and Peter Doocy while she was doing an interview with the Pod Save America guys where she was asked about Joe Biden’s remarks calling Peter Doocy a “son of a b**ch.” The Pod Save America guys asked her if she thought Doocy sounded like a “stupid son of a b**ch.” She responded that Fox fed him questions to ask that made him sound like a “stupid son of a b**ch.” So much for class from the Biden Administration. She did get some backup (or bootlicking) from CNN’s Brian Stelter, who claimed that she didn’t “criticize him directly.”

So I didn’t want to not cover her effort to clean up her comments. This response is definitely not going to cut it and shows why she’s heading out to MSDNC.

“Full video shows I also told a story about Peter’s grace last night and made very clear I was not being critical of him or any reporter at Fox, and instead was critical of the slant of some Fox topics,” Psaki claimed. “He is doing his job. I am doing mine. We debate. We disagree. I respect that.”

With that, she’s as delusional or dishonest as Joe Biden. That’s pretty shameless. She falsely claimed that he was operating from questions that were given to him. That’s a lie and even had Fox not refuted it, you would know from watching Doocy and seeing him ask the questions that they are his own. Psaki was attacking both Fox and Peter Doocy — suggesting he’s just an automaton being run by Fox. And she thinks that’s being respectful? Now I get that Biden operates from answers he’s given and a list of people he’s supposed to call on, but that doesn’t mean other people have the same deficiencies as Joe Biden.

Notice what’s missing in Psaki’s response is any apology at all for her remarks. It sounds like someone told her to try to clean things up and make nice. But she didn’t do a very good job.

Psaki did tell the story that Doocy had grace in responding to Joe Biden’s attack on him back in January. But the fact that Doocy was being graceful and doing his job doesn’t excuse the fact that Biden was classless or that she was as well. It also doesn’t change the fact that she was lying about both Doocy and Fox. She also lied about Joe Biden during her Pod Save America comments, saying that Biden had “apologized” to Doocy for his remarks. He never did, he said “nothing personal, pal.” That’s not an apology.

The difference is Doocy is doing an honorable job — being one of the few people asking the questions that a lot of America wants answers to from the Biden Administration. Psaki, on the other hand, isn’t just ducking the questions, she’s lying and being nasty like this in response to those questions — on our taxpayer dime. There isn’t a comparison.

Let’s not forget, what prompted all this, to begin with: Peter Doocy had asked a question about inflation that Joe Biden didn’t like. Now every American is asking about inflation and Biden’s polls have tanked further because he’s failed to be able to deal with it.