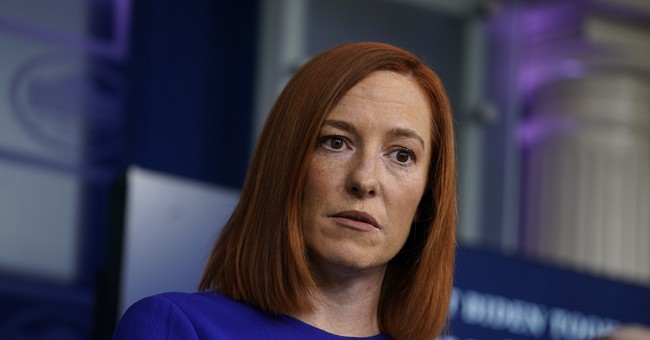 The Consumer Price Index (CPI) numbers were just released and — in a bit of bad news for the Biden administration — they indicated inflation rose faster in April 2021 than it had in 12 years.

The Consumer Price Index, which measures a basket of goods as well as energy and housing costs, rose 4.2% from a year earlier. A Dow Jones survey had expected a 3.6% increase. The month-to-month gain was 0.8%, against the expected 0.2%.

The increase in the annual headline CPI rate was the fastest since September 2008, while the monthly gain in core inflation was the largest since 1981.

Energy prices overall jumped 25% from a year earlier, including a 49.6% increase for gasoline and 37.3% for fuel oil. That came even though most energy categories saw a decline in April.

Gas consumers don’t need to see those numbers to know they’ve been paying more at the pump. Nor do people looking to buy a used car or a new home.

But that bad news didn’t stop White House Press Secretary Jen Psaki from telling Americans that the rising prices were simply a sign of the Biden administration’s “successful economic strategy” in a word salad answer to a reporter’s question Thursday.

It’s all about the data, man.

“Some reaction to the CPI numbers that came out just yesterday…ya know, our view on that is it reflects the reality of an economy that’s rapidly turning back on because of a successful economic strategy. If you dig into the data, there are a couple of factors at play that I think people are taking a look at now that we’ve dug into the data more; including the fact that, for example, airfare has increased by 10 percent but we’re still almost 20 percent below pre-pandemic levels. One of the biggest impacts we saw in the data yesterday was on used car sales, and that is a direct impact of the semiconductor chip shortage, so the point is there’s a number of factors here that can be explained and we’re working to address and, uh, I think as we continue to communicate that, um, hopefully that will give some comfort to the American people and of course, industries.”

Translation: Yeah, it’s bad. But we’re going to find data points we can reasonably find a way to explain away so you’ll all think we’re doing better at this than we are.

She has some help.

In addition to rising prices, one of the main reasons for the big annual gain was because of base effects, meaning inflation was very low at this time in 2020 as the Covid pandemic caused a widespread shutdown of the U.S. economy. Year-over-year comparisons are going to be distorted for a few months because of the pandemic’s impact.

Federal Reserve policymakers and many economists are dismissing the current round of numbers as transitory, with the expectation that inflation settles down later this year around the 2% range targeted by the central bank.

The pandemic is to blame, you see, because it made inflation artificially low last year by comparison. We — and our wallets — shall soon discover if that’s true.

In the meantime, don’t be surprised to hear a lot about something called the Phillips Curve, an economic theory that “claims that with economic growth comes inflation, which in turn should lead to more jobs and less unemployment.” The administration could start using that excuse if things don’t improve soon. So keep this report from Cato handy when you do, because there are plenty of questions about the reliability of the theory.

The Federal Reserve continues to incorporate the Phillips curve in its macroeconomic models even though the empirical evidence for a negative relationship between inflation and unemployment is weak at best. In a recent study by the Brookings Institution, the authors note that the Fed still relies on the Phillips curve as a “key factor” in setting its policy rate and as a “tool … to forecast what will happen to inflation when the unemployment rate falls, as it has in recent years” (Ng, Wessel, and Sheiner 2018: 1-2).

At the very least, Psaki’s attempts to redefine “economic success” should be fun to watch through the tears.