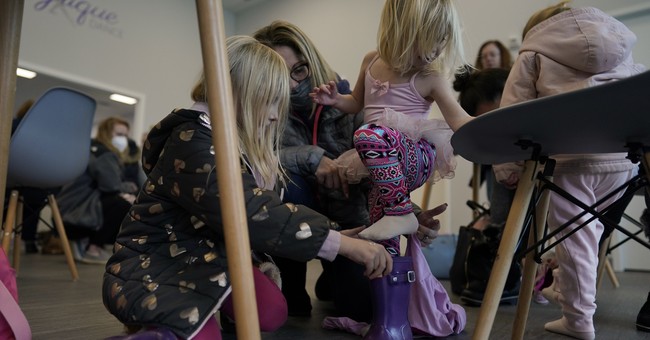 When Florida’s legislature was considering the Parental Rights in Education bill earlier this year, progressives exploded in outrage over the notion that a teacher should not be allowed to instruct small kids on matters pertaining to sexuality and gender identity. High-profile Democrats lodged some of the most moronic complaints against the proposal, which was later signed into law by Gov. Ron DeSantis. They even went so far as to deceptively label the legislation as the “Don’t Say Gay Bill” because they believe the American public is stupid enough to believe the legislation was specifically designed to target members of the LGTBQ community.

But Washington Post contributing columnist Kate Cohen took the cake in a recent op-ed in which she argued that the law, which allows parents to sue school districts and schools in which teachers instruct kids on sexuality and gender identity, should be also be used against instruction on heterosexuality and discussions about boys and girls. However, she completely undermined her argument by misinterpreting the law and how it is supposed to be applied.

Cohen started out by referring to a parent who complained about a book about a transgender boy. She wrote:

Under the new law, she could sue the school for exposing her child to that book, but not — it’s worth pointing out — because it’s about a transgender boy. Although this and similar legislation have been nicknamed “don’t say gay” laws, the Florida law does not, in fact, say “gay” or “transgender” or anything like that. It cloaks its discriminatory intent in studiously neutral language: “classroom instruction by school personnel or third parties on sexual orientation or gender identity may not occur in kindergarten through grade 3.”

The author continued, claiming that to supporters of the law, the terms “sexual orientation” and “gender identity” are not “neutral terms that encompass an entire spectrum of human experience, including heterosexuality.”

But that’s not all.

After showing that she knows very little about the types of folks who support the law, Cohen insists that they don’t use these terms correctly “because they don’t believe the words apply to them,” and that they “think that only gay people have a sexual orientation” and that “only trans people have a gender identity.”

The author then suggests people should treat “every lesson that endorsed any sexual orientation or gender schema as an actionable offense.”

This is where she completely jumps the shark. With a straight face, she wrote:

What if we filed a complaint every time a teacher instructed our children to use certain bathrooms solely on the basis of their gender identity?

What if we called a lawyer when we discovered our children were learning that the “mommies on the bus” said “shush, shush, shush”?

Cohen then pointed out that Gov. DeSantis signed the bill into law at a school “where students wear uniforms designed specifically for ‘girls’ or ‘boys'” — as if that were some clever point demonstrating some type of duplicity.

Later in the piece, she suggests that because of Alabama’s law, which is similar to Florida’s, teachers “should probably refrain from any allusion to heterosexuality, including references to their husbands, wives, boyfriends, girlfriends, upcoming weddings or – heaven forbid – expected babies.”

This is the type of op-ed that further demonstrates that folks like Cohen probably rarely talk to folks who disagree with them. It also reveals a rather odd form of dishonesty.

Anyone familiar with these laws knows that they are not intended to ban any mention of gender identity or of relationships. If a teacher mentions that they had dinner at Fuddrucker’s with their significant other, that would not be actionable. The law clearly says “instruction,” which means an educator is actually teaching about sexuality or gender identity. If a teacher teaches students that they can choose their gender, that could fall under the auspices of the legislation. But referring to someone as a “boy” or “girl” clearly does not. Any parent who attempted to file a lawsuit under these circumstances would likely be laughed out of court.

But Cohen and her ilk know this.

Proponents of the bill do not want any instruction on sexuality and gender identity for small kids. Would Cohen actually believe that those who favor the law would accept a teacher giving detailed instructions regarding heterosexual intercourse? Of course, she doesn’t, which shows just how disingenuous these folks are. This is why the majority of Americans – including a majority of Democratic voters – favor the law.

The question we should be asking folks like Cohen is: Why do you want teachers to instruct small children on sexuality and gender identity? What benefit does it provide? Why shouldn’t parents be able to opt their children out of such discussions?

Chances are, they won’t have much of an answer, which is why they have to resort to deception. But would we expect anything different?