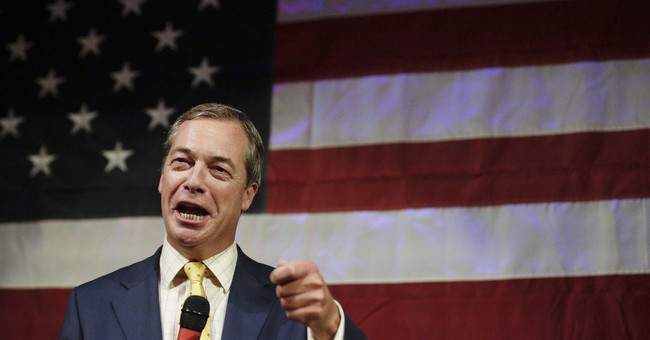 While the Democrat Party and its sockpuppet state media continue to do their damnedest to publicly ignore the obvious-to-everyone-else steady decline of Joe Biden’s mental acuity-not unlike the emperor’s devastating new clothes-world leaders and former leaders not only see it; they’re now speaking out.

One such former leader is Brexit architect Nigel Farage, former leader of the UK Independence Party and member of the European Parliament, no stranger to saying exactly what’s on his mind and telling all who don’t like it where they can stuff it. (I say that as a compliment; I know a political pundit just like that.)

During a segment on “Just the News — Not Noise,” Farage was blunt and to the point in his assessment of Biden’s declining mental state, telling co-host Amanda Head and John Solomon that Biden’s infirmities are obvious — and a danger.

It is so obvious this man cannot hold the responsibilities of leading America, let alone the free world.

Amen. Farage also called Biden “senile” and “an embarrassment to America.” Then it got even better.

Without America leading the free world, there is not a free world. It’s just as simple as that.

We are your best allies that you could possibly have, and we have been for over 100 years, but ever since that moment of the catastrophic withdrawal from Afghanistan, of handing it back to the Taliban, the question people have been asking is, ‘Where is America?

If Farage’s last line could be more spot-on, I’m unaware of how. Tell me you haven’t thought about Vladimir Putin and Xi Jinping on a secure line, laughing their brutal dictators’ asses off about Biden debacle after Biden debacle over the last 15 months. Bet you can’t.

So how does Farage think Putin and Ukraine would’ve played out with Donald Trump in the White House instead of Joe Biden? Funny you should ask; let’s find out.

As I speak to you, this time last week, I was with Trump at Mar-a-Lago. I want to promise you one thing. If Trump was still president, Putin would not have invaded Ukraine. So, we have a crisis– a global crisis; a crisis of leadership; lack of leadership across the West, and Biden, well, I think he must be the worst president America has ever, ever had. And that’s bad for you guys, but I promise you, it’s bad for the rest of us, too.

So, yeah, to be fair, Farage is a Trump loyalist, through and through. That said, one would not be out of line to suggest Farage has a bit of a vested interest in the failure of Biden, tantamount to a Trump surrogate.

But that said, Farage’s assessment of the disaster currently occupying the Oval Office was correct — and it continued to get even more so.

The brash Brit (again, a compliment) said Biden should have gone to Moscow to meet with Putin face-to-face. And then the “but.”

And the 25th Amendment? Farage observed — before then dropping the dreaded S-word on Biden.

Nobody is daring to say the 25th should be called when it’s clear that America has a president who [is] … senile. He’s not up to the job.

“Even if Biden were to go to Europe to try and help mend relations, he would not help the situation,” Farage said. Truth is, Biden would no doubt hurt the situation. To what degree is anyone’s scary guess. Farage agreed:

It is so obvious this man cannot hold the responsibilities of leading America, let alone the free world.

Farage then compared how the left went after Trump with the 25th Amendment at the drop of a hat.

I don’t get it. Whenever Trump said something on the world stage people thought was stupid there were cries in D.C. for the 25th Amendment to be called.

Aaand Farage nailed it again. Moreover, the options facing the Democrat Party could hardly be worse.

On one hand, a senile, steadily declining man who tries to shake hands with thin air, bizarrely claims we cut down all of our forests, and lies his head off at a gun-control event — all of it just this week. On the other hand, we have a vice president who cannot get out of her own way, and makes ridiculous nonsensical comment after ridiculous nonsensical comment. The lights might be on in Cackles Kamala’s head, but clearly, nobody’s home.

So, what are the Democrats going to do? Dunno, but I do know Democrats are shrewd and cunning — and dangerous as hell when backed into a corner.

While I’m confident wheels are in motion behind the scenes to craft and implement a plan to remove Biden from the White House while also denying the presidency to another disaster in the person of Kamala Harris, I don’t foresee a straight-up 25th Amendment play by the Democrats, nor do I think that many — if any — Democrats would climb aboard a Republican effort to launch the amendment.