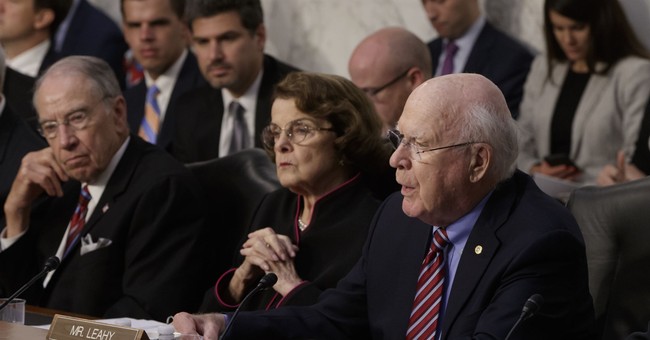 A large portion of the Senate is more akin to a nursing home these days, with many members well into their 70s (and in some cases, their 80s) continuing to desperately hold onto their positions of power. We’ve seen what age can do to someone in regards to Joe Biden and Nancy Pelosi, and now a top Democrat senator is reportedly mentally unwell, at least according to multiple sources.

Sen. Dianne Feinstein (D-CA), who ironically has become one of the more moderate voices in her party, appears to be suffering from symptoms that sound a lot like dementia according to the San Francisco Chronicle.

When a California Democrat in Congress recently engaged in an extended conversation with Sen. Dianne Feinstein, they prepared for a rigorous policy discussion like those they’d had with her many times over the last 15 years.

Instead, the lawmaker said, they had to reintroduce themselves to Feinstein multiple times during an interaction that lasted several hours…

…Rather than delve into policy, Feinstein, 88, repeated the same small-talk questions, like asking the lawmaker what mattered to voters in their district, the member of Congress said, with no apparent recognition the two had already had a similar conversation.

The episode was so unnerving that the lawmaker — who spoke to The Chronicle on condition they not be identified because of the sensitivity of the topic — began raising concerns with colleagues to see if some kind of intervention to persuade Feinstein to retire was possible. Feinstein’s term runs through the end of 2024. The conversation occurred several weeks before the death of her husband in February.

None of that sounds good, and it’s sad to see someone suffering in their later years like this but still refusing to retire in order to spend their remaining days with their family. The grip of power is intoxicating, no doubt, but it’s not healthy to still be in office into their 80s. And to be sure, this isn’t just a Democrat problem. There are figures on the right who also refuse to let go. Unlike Feinstein, Mitch McConnell and Chuck Grassley, for example, do appear to be mentally healthy, but I still see little reason to not prefer younger politicians. That goes for the presidency as well.

Of course, there is another part of this. Feinstein is deeply unliked by the far-left of the Democrat Party. They have been pushing her to retire for years. So while she may in fact be suffering from dementia or similar decline, it’s at least possible these sources are exaggerating the situation in a power play to force her retirement. I do not think that’s the case, though. When is the last time we even saw Feinstein speak publicly? Something is up, in my opinion.

As to the balance of power in the Senate, a Feinstein retirement wouldn’t change it on its own. Yet, given that Gavin Newsom would appoint her replacement (her term ends in 2025), Democrats would almost certainly end up replacing her with a far-left radical. That’s an objectively bad thing for the nation. Unfortunately, with California being what it is politically, Feinstein’s ride into the sunset was always going to be the end of any moderation regarding the Golden State’s US Senate seats.