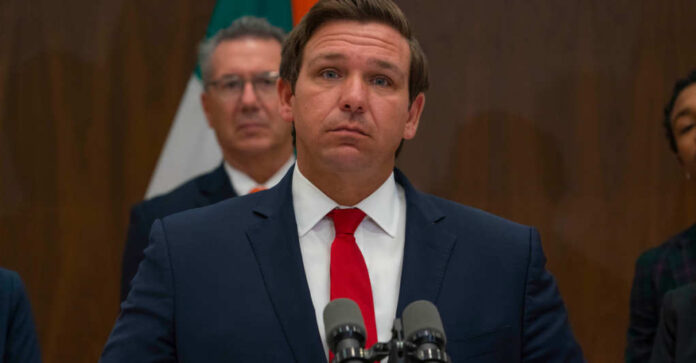 The Democrats are again looking for ways to separate themselves from the Republican Party and the rest of the country. Their beloved Stacey Abrams is running for the governor’s office in Georgia. Abrams is laced full of liberalism and forcing voting changes on people that would enable the Democrats to cheat at future elections. Her presence as governor is set to be toxic and destructive to everyone around her.

The most significant effect of a win for her would be seen between the states of Georgia and Florida. The two states have a long history of friendship and cooperation. But Stacey Abrams hates Republicans and has already determined not to work with them. She would instead isolate herself from the world than work with those of an opposite viewpoint.

Ron DeSantis is watching the election in Georgia very closely. He knows that a liberal win to the north will affect Florida. In response to her popularity, the Floridian governor stated, “If Stacey Abrams is elected governor of Georgia, I just want to be honest, that will be a cold war between Florida and Georgia. I can’t have [ former Cuban leader Raúl] Castro to my south and Abrams to my north, that would be a disaster. So I hope you guys take care of that, and we’ll end up in good shape.” Abrams will ignore and push away an ally to the south because Florida would have a Republican governor.

The liberal candidate is no better than the communist dictator to the south. DeSantis pointed out that the only way to say the southeast is for Republican voters to get out and vote when the time comes. The red wave needs to sweep through Georgia the way it did in Virginia. A clear message must be sent to the Democrats that Americans will not stand for the oppressive rule that defines the Democratic Party.

DeSantis is a man who protects freedom and people’s right to choose what is best for themselves and their families. Abrams would be one that would seek to take all of that away from the people and put her government in charge of the people. But that leadership philosophy is precisely what cost the liberals the state of Virginia.

DeSantis’ stance on freedom and the protection of fundamental rights has earned him a center stage position from the liberals. They make up stories about him and even try to discredit his family in a crisis. But that has not stopped him from doing his job and protecting people.

Liberal leaders in Los Angeles County, California, have banned their workers from traveling to Florida. They were so engaged that the Democrats could not abuse kids that they felt the need to keep people from visiting the state for business purposes. The fight between Disney and Florida should have no bearing on how another business occurs. But the Democrats are a bunch of emotional crackpots who let their feelings dictate their actions.

Abrams has proven herself to be the same emotional baby as the rest of the Democrats. She lost the governor’s race in 2018 and squealed that her loss was rigged and unfair. She accused Brian Kemp of doing things that led to his win. She was so convinced that the election was staged that it was spiteful and vengeful to the winner. She could not bring herself to congratulate Kemp on the win.

The state of Georgia cannot afford to live under liberal rule. The future of the state hangs in the balance. The Democrats are known for high taxes and oppressive rule. Georgia will become the next California of the east if Abrams sits down at the governor’s desk.