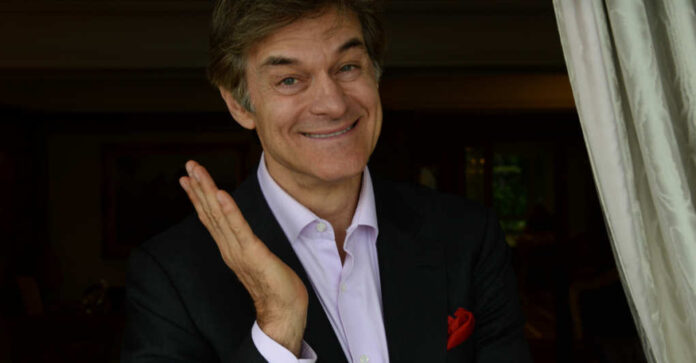 Many people were surprised that former President Donald Trump announced this weekend his support of celebrity surgeon Dr. Mehmet Oz. The famous TV doctor is running as a Republican for the United States Senate in Pennsylvania. This is a hotly contested seat that many people are watching because this race could determine control of the Senate after the midterms. It would then also impact the last two years of President Biden’s presidency. There are a large number of candidates who want retiring Senator Pat Toomey’s seat.

Trump said in a statement, ”Dr. Oz is smart, tough, and will never let you down, therefore, he has my Complete and Total Endorsement.”

Dr. Oz responded to Trump’s endorsement by saying that Trump “knows how critical it is to change the kinds of people we send to Washington. I’m ready to fight. I thank him for that, and I am proud to receive his endorsement.”

The main opponent on the Republican side of the race for Dr. Oz is David McCormick. He is a former hedge fund CEO. According to the most recent polls, McCormick and Oz are very close in the primary contest that will be held on May 17.

The victor of that contest will face the winner of the Democratic primary. Both John Fetterman, the progressive lieutenant governor of the state, and Congressman Conor Lamb, a moderate who represents the northwestern suburbs of Pittsburgh, are locked in a close race.

Senator Toomey is one of seven Republican senators who voted to convict Trump in February of 2021. Trump was charged with inciting the January 6 attack on the Capitol and was brought before the Senate for impeachment. The vote was 57-43 and did not meet the two-thirds majority necessary to convict Trump.

Dr. Oz is well known due to his syndicated “The Dr. Oz Show on TV. He has significant name recognition from his TV audience. His fame was threatened back in 2014 when there was a probe into some fishy diet product ads and also products promoted on his show that did not meet accepted scientific demands. One of those products was green coffee bean extract as a dietary supplement. Dr. Oz said in 2012 that this product was a “miracle.”

At first, former President Trump endorsed Sean Parnell for Senator Toomey’s senate seat in PA. But Parnell was forced to suspend his campaign in November or 2021 after his former wife alleged physical abuse and he lost custody of his three children.

The fact that Trump has now endorsed Dr. Oz has generated some fury among his loyal constituency. They say that the Doctor has flip-flopped on the abortion issue and they are not sure that he really is an “America First” candidate.

Some of the Trump followers are confused because the other GOP candidate, Dave McCormick, has Hope Hicks by his side. She is a former Trump administration official. Another member of Trump’s team, Stephen Miller, shifted his support from McCormick to Oz after Trump made his announcement.

And Sean Parnell talked about his respect for Trump and how honored he was to have his endorsement. But he said that he was disappointed by Trump’s endorsement of Dr. Oz because he is the “antithesis of everything that made Trump the best president of my lifetime.”

Conservative radio host Erick Erickson tweeted that he thought it looked like Trump’s staff was sabotaging the former president by convincing him to make the “worst possible endorsements.”

Perhaps the most significant criticism came from Republican Representative Mo Brooks from Alabama. He is also running for a Senate seat. He said that Trump has now surrounded himself with staff who are “on McConnell’s payroll and hostile to the MAGA agenda.”

McConnell has not come out in support of either GOP candidate because he believes they are in a good position to win no matter who wins the primary.

Needless to say, many will be watching to see what influence Trump’s endorsement brings in May.