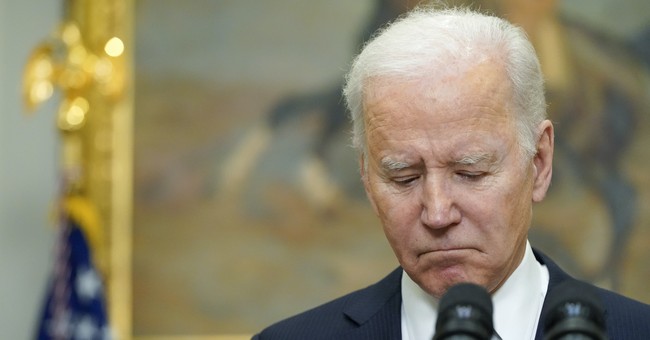 The March number came in at 8.5 percent.

The White House tried to cushion the news released this morning with a preemptive spin yesterday which was covered by CNBC.

The Biden administration is bracing for Tuesday’s key consumer inflation report to show that the prices Americans pay soared in March, as Russia’s assault on Ukraine caused energy prices to jump.

White House press secretary Jen Psaki said Monday that the Labor Department’s previous report — which showed prices rising at a dramatic rate in February — failed to include the majority of the jump in oil and gas costs caused by the Kremlin’s unprovoked invasion.

“We expect a large difference between core and headline inflation,” she continued, “reflecting the global disruptions in energy and food markets.”

You have to give it to Jen Psaki for her phraseology on this. Saying that the expected number to be released was extraordinarily elevated would also be a correct way to describe middle-class Americans’ blood pressure at seeing how fast prices are rising across the board. That the White House is also still saying that this is a Putin price hike is not dealing with reality. That lack of clarity also explains why Joe Biden is making Jimmy Carter look like a competent president in regard to the economy.

As my colleague Mike Miller wrote yesterday here at RedState (Biden’s Hypocrisy Reaches New Heights in Blatant Effort to Spin the Economy Both Ways), his whole administration blames everyone but the current crew at 1600 Pennsylvania Avenue which is pure garbage spin.

I am not going to again point to the abject idiocy of lying about Vladimir Putin being responsible for the Biden Oil Crisis, the Biden Economic Crisis, or the Biden anything-else crisis, but please.

Incidentally, a final word on the student loan pause, which affects 41 million borrowers who collectively hold more than $1.3 trillion in total debt and has already cost taxpayers more than $100 billion, according to Education Department estimates. I had no problem with Trump’s student loan moratorium during the pandemic, and I’d bet a dollar he would have ended it months ago if he were still in the White House, given that his intent was valid — but the pandemic has long passed.

Let’s call a spade a spade: Biden is fully aware of the far-left demand for the cancellation of student loan debt. He is too chicken-crap to definitively agree or not agree. It really is that simple.

So now we have weak-kneed Biden, who tries to have it both ways on damn near everything, and that reality could not be more clear. He waffles, he equivocates, he lies out of both sides of his face — all because he doesn’t want to tick off the so-called “moderate” wing of the Democrat Party, but sure as hell wants to placate the radical left, led by the erstwhile bartender and her clueless Squad.

The talking heads in Washington DC and around the rest of the country who are currently claiming that Joe Biden’s presidency is Obama’s third term must seriously be ticking off Barack Obama. POTUS 44 never had gaudy inflation numbers like this and under Obama, we had sluggish growth but the C.P.I. and inflation numbers were never running this rampant and hurting the country in this way.

But yeah, it is Putin’s fault.

Just in case anyway is wondering, this economic debacle is not the Russian President’s fault, but this sure as hell is: Trump Is Being Betrayed by Anyone Who Says They Support Both Him and Putin’s Invasion.

I think we can safely say now we know why our beloved White House Press Secretary had it leaked a couple of weeks back that she would be leaving her job as president Puddin Brains’ spokesperson to take a job at MSNBC. With inflation running at this rate, she needs a pay raise just to afford to live in the high-flying style she’s accustomed to.

Bad for the rest of the county.