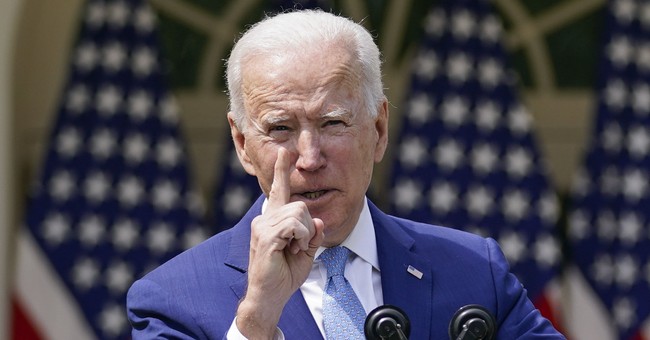 Joe Biden was talking about his new dangerous gun control moves today, including a new rule on “ghost guns.” He announced a new nominee to head the ATF in a Rose Garden ceremony on Monday — former U.S. Attorney from Ohio under Barack Obama, Steve Dettlbach. Biden’s last nominee, David Chipman went down in flames because of concerns about his radical anti-gun positions.

A senior administration official told ABC News, “At its core, this rule clarifies that anyone who wants to purchase a weapon parts kit that can be readily be converted to a fully assembled firearm must go through the same process they would have to go through to purchase a commercially made firearm in short weapon parts kits that may be readily convertible into working fully assembled firearms must be treated under federal law.”

Gun Owners of America have argued it’s an effort to expand gun registry and control even the ability to buy parts and repair guns. The legality of Biden’s new rule is likely to be challenged because the executive branch doesn’t get to make the law, that’s up to Congress.

Biden made several questionable comments during his remarks.

He confused the ATF (Bureau of Alcohol Tobacco Firearms and Explosives) with the AFT (The American Federation of Teachers).

Then he spoke about prosecuting people with ghost guns for a federal crime.

As it is, these criminals are not being properly pursued in Democratic-run cities. Is he saying they weren’t being federally prosecuted already for gun crimes and he’s just discovering that now? Or how is this different?

Biden also repeated a lot of the lies that he commonly tells. Doesn’t any of his coterie ever try to tell him to stop repeating demonstrably untrue things? Either they don’t care or they tell him but he says it anyway because he just can’t stop lying.

He claimed that you couldn’t buy a cannon when the Second Amendment was passed.

That’s a lie, you could. Indeed, you can now. He got four Pinocchios on this claim in the past. But that hasn’t stopped him from saying it.

Biden attacked gun manufacturers, claiming they had some kind of unique immunity that no other company has — that they can’t be sued. This is just untrue. They can be sued for anything relevant to their manufacture, such as if gun malfunctions. But why should they be responsible for the actions of a criminal with a gun? It would be like going after car manufacturers because a driver tried to run someone down. It’s idiotic. How would going after the manufacturers stop gun crime? It wouldn’t.

Whoops. He must have Hunter and the prostitutes on his mind.

Then he told a nonsense story about how people shouldn’t be able to have more than 20 bullets in a gun. He still thinks the Second Amendment is about hunting deer.

What if you are in a situation where a mass shooter (or shooters) are shooting at you but Joe has cut your ability to respond with no more than ten bullets? You may be out of luck. He’s so ignorant about guns and gun rights, sometimes it’s scary. He’s also lying about the success of his assault weapons ban. “The law that barred the sale of assault weapons from 1994 to 2004 made little difference,” Lois Beckett reported for The New York Times years ago.

Biden remarked about Dettelbach being responsible for the good weather. Some thought that might reference an anti-Semitic conspiracy theory.

It could just be a random comment, but Joe Biden has made so many questionable racial and ethnic comments, that it’s easy to believe he could be making another one.

The event almost ended very badly for Joe Biden when he appeared to trip coming down the steps of the raised platform in the Rose Garden.

At least that was going down steps. He’s also managed to trip three times in a row going up some steps. While anyone can trip, between his gait issues and his general confusion, he’s getting worse.