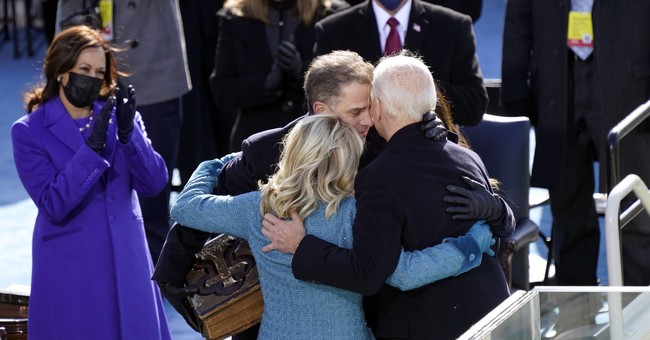 Joe Biden and the Biden Administration have denied that he had anything to do with his son’s business dealings, and the common defense for Joe on the Democratic side has been that any questions don’t pertain to him since he isn’t involved in his son’s business.

We’ve reported on why this was a lie in the past over the past two years. This past week, we’ve noted things like Joe Biden writing college recommendations for the children of one of Hunter’s Chinese business partners, and Hunter Biden planned to have Joe, Jill, and James Biden be office mates with Gongwen Dong, who was the emissary of the Chinese company, CEFC. We’ve also noted a variety of contacts that Joe has had with Hunter’s Chinese, Russian, Kazakh, Ukrainian, and Mexican business partners.

But because the Biden team has continued to lie about it this week, I wanted to remind folks of some of those inconvenient facts that blow ol’ Joe’s lies out of the water — now that the liberal media has admitted to the truth of the laptop.

We’ve talked about the email referencing a percentage in a new company connected to the Chinese: 10 percent for the “big guy” (who Tony Bobulinski identified as Joe Biden). But in truth, in another email, what Hunter was allegedly delivering to Joe out of what he made was far more than that.

“I hope you all can do what I did and pay for everything for this entire family for 30 years,” Hunter Biden groused to daughter Naomi in January 2019. “It’s really hard. But don’t worry, unlike pop, I won’t make you give me half your salary.” Pop is Joe Biden.

So, if it was true that he was kicking back 50 percent of his earnings to his father, then what he makes from China, Russia, or Ukraine becomes very important, because some of that would be going to Joe Biden.

Then there was Hunter’s business partner in Rosemont Seneca, the president Eric Schwerin, who seemed to have been involved in taking care of Joe Biden’s finances, even getting his tax refund check. Numerous emails went back and forth about payments for expenditures on Joe’s house in Wilmington, Delaware.

The expenses are spelled out in an email to Hunter from business partner Eric Schwerin from June 5, 2010, entitled “JRB Bills.” They concerned the upkeep of Joe Biden’s palatial lakefront home in the wealthy Greenville enclave of Wilmington, Del. JRB are President Biden’s initials.

In a July 6, 2010 email titled “JRB Future Memo,” Schwerin said he was in touch with the vice president about his personal financial matters and was eager to start discussions with him about how to cash in when he left office.

“Your Dad just called me (about his mortgage) and mentioned he’d be out a lot soon and not really back until Labor Day … He could use some positive news about his future earnings potential.”

So he knows nothing about his son’s business, but his son’s business partner is taking care of his finances and getting him his refund check? And he’s talking about his “future earnings potential” with Schwerin and Hunter? So what did he expect Hunter to do for his “future earnings potential”- or aren’t we supposed to ask that?

Paging Sen. Ron Johnson (R-WI) and Sen. Chuck Grassley (R-IA), you might want to add these facts and questions in to the burgeoning investigation that you have going on there — because Joe Biden and his Administration have been lying their heads off when it comes to all this.