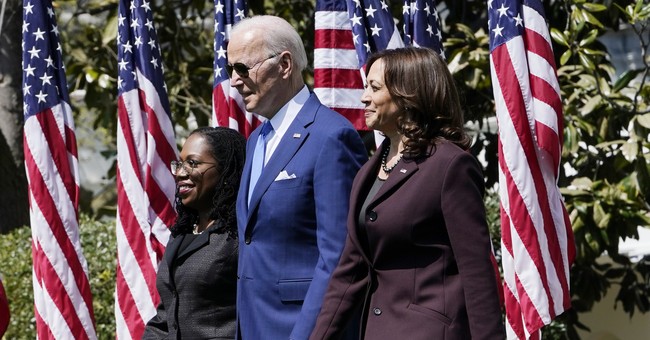 On Friday, Joe Biden took part in an event at the White House to celebrate the confirmation of Judge Ketanji Brown Jackson to the Supreme Court.

In attendance at the event was Kamala Harris. Harris had been in close contact with her Communications Director Jamal Simmons, who announced on April 6 that he had come down with COVID. Harris said that she would be following “CDC guidance.” CDC guidance says that if you have had that close contact and you are up to date with all your vaccinations, you should wear a well-fitting mask for 10 days.

But Harris was without a mask in the Senate on Thursday when Jackson was confirmed. Then again, during the ceremony at the White House, which was held outside, she was also without a mask, although she hugged KBJ and stood next to both her and Biden during remarks.

When White House Press Secretary Jen Psaki was asked about this by Peter Doocy, she had all kinds of excuses, saying that’s why they had the ceremony outside, and that Kamala wore a mask inside when they had a “meet and greet,” she was socially distanced from Biden and others. I pointed out how that was a lie because she hugged KBJ for the camera, and was obviously within six feet of Biden and others.

But now there’s evidence that Psaki was telling even more lies than I noted on Friday. There was a ceremony inside the White House, contrary to what Psaki said, as the following picture shows. Kamala also was not wearing a mask for this indoor ceremony, plus she was also right next to Joe Biden and Jill Biden.

So, I have a question for the media: who was there, besides Peter Doocy, who questions Psaki? She straight-up lied to you — there’s no question. You have the physical evidence — the videos and the photos, there’s no way to get around this. When are you going to call her on this? These are the kind of lies they are telling because they think they can get away with them, even when they are so demonstrably false. And they can, when the media is so compliant.

But this also says something about what little disregard Kamala and the Biden team have for Americans, when they’ve beaten Americans over the head with the COVID “rules” — yet they simply don’t care to follow them. And when you call them on it, they have all kinds of excuses and will jump through hoops to explain why there’s an exception.

But if ever there was an example of how blatantly they lie — this is it. They really have no shame.