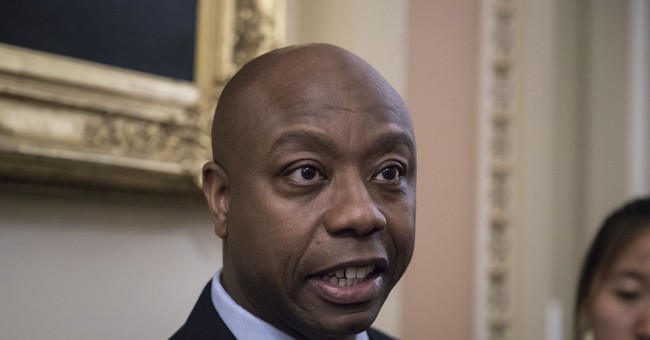 As the twisted left sees it, Black conservatives who refuse to live on the liberal plantation where they belong must be ridiculed, dismissed, ignored — and destroyed if necessary. And who best to gleefully assign herself judge, jury, and executioner than the current hood ornament of the race-hustling industry, MSNBC host Joy Reid?

Our story begins on Monday, when Scott announced he would vote against the Supreme Court confirmation of Ketanji Brown Jackson, writing in a statement on his homepage:

The historic nature of Judge Jackson’s nomination reinforces the progress our country has made. However, ideology must be the determining factor–not identity–when considering such an important lifetime appointment.

It is clear that Judge Jackson’s judicial philosophy and positions on the defining issues of our time make her the wrong choice for the Supreme Court. From leaving the door open on court-packing to her multiple overturned opinions, I cannot support a nominee with her record of judicial activism.

I remain disappointed that President Biden missed the opportunity to unite the country with a mainstream nominee that could have received resounding bipartisan support. For all these reasons, I will be voting no on Judge Jackson’s nomination to the Supreme Court.

[Jackson was confirmed on Thursday by the full Senate, 53-47.]

How “racist,” right? I’m kidding. Unfortunately, yet disgustingly predictable, Joy Reid was not.

In response to Scott’s decision to oppose Jackson, as reported by The Blaze, Reid claimed the senator is being “dog-walk[ed]” by fellow South Carolina Republican Sen. Lindsey Graham and law enforcement, basically calling Scott a willing stooge for Graham’s “barking-dog racism.”

And in response to a random keyboard warrior who tweeted “Tim Scott haven’t [sic] accomplished nothing [sic] Since [sic] he [sic] been [sic] in the Senate” [rolling-eyes emoji] Reid tweeted:

All accuracy here. Not surprised by anything Senator Tim Scott does. He let Lindsey Graham and the sheriffs dod-walk him and destroy police reform after pretending to work on it and now he’ll go along with Lindsey’s dog-barking racism again Jackson because: he’s Tim Scott.

The woman’s obsession with race has left her totally delusional — but you already knew that.

Never mind any of it. What really matters to the MSNBC race-hustler extraordinaire is that a Black senator voted against a Black Supreme Court nominee — itself, racist as hell.

Tim Scott being Tim Scott — and I’m talking about impeccable credentials and exemplary integrity — fired back at Reid during a Thursday appearance on ‘Fox & Friends,” explaining why the MSNBC host’s silly blast was offensive. As transcribed by The Blaze:

What is so offensive about what Joy is saying is that a black man cannot think for himself, that I have to follow somebody else. That is the most ridiculous thing I’ve ever heard.

But the power of the liberal elite wants to attack us like vicious dogs because they do not want anyone standing up opposed to what they are doing, leading our country in the wrong direction.

“It is vile, it is offensive,” Scott continued, “and we should stop allowing the liberal media to push these stories by their hosts that want one thing and one thing only: progressive, liberal policies that make it harder for African-Americans — not easier.”

I cannot say “Amen” because I’m not Black. I don’t know what it feels like.

But having witnessed the exploitation of — and pandering to — Black America by the Democrat Party for the last six decades, I have a fairly good idea. The Democrats have not only failed spectacularly in their hollow promises to Black Americans; they have convinced a (dwindling) majority of Blacks that while the Democrats might not have delivered as promised, to just think how bad things would be if they weren’t in office to protect the known universe from evil “systemically-racist” Republicans.

Moreover, I have a damn good idea of what Senator Tim Scott not only believes — but also how he lives.