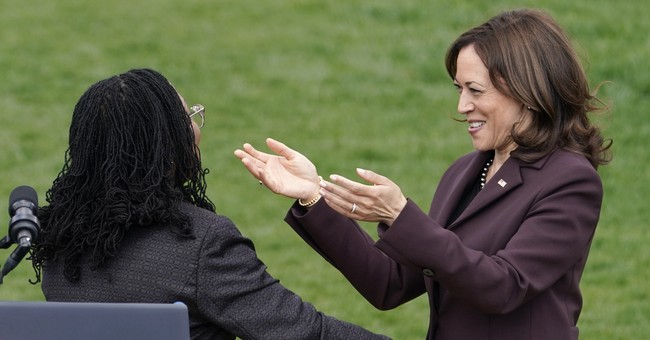 At some point, we should probably hold a contest for the worst response from the White House, because with Biden Administration, there’s certainly a boatload of things to pick from.

But I would have to say that White House Press Secretary Jen Psaki’s response on Friday about Kamala Harris’ failure to wear a mask over the past couple of days ranks right up there as one of the worst. Now, maybe it’s because Psaki is on her way out the door to MSDNC in May. Or maybe she’s just given up at this point on trying to sling any more bull on behalf of this sinking ship. But, it was bad.

Fox’s Peter Doocy asks about Kamala Harris not wearing a mask after being exposed to close contact with Jamal Simmons, her Communications Director, who announced he had COVID on April 6. After that announcement, Harris’ staff said she would be following CDC guidance. CDC guidance says that you should wear a “well-fitting mask” for 10 days.

“Tell me more, Peter,” Psaki said, in a snotty remark. “I’m sure this is going somewhere.”

He asked why wasn’t Harris wearing a mask, given the CDC guidance that she said she would follow. “So why is she giving the new Supreme Court Justice [not quite yet, she still needs to be sworn in] a big hug with no mask?”

Psaki responded that it was safer outside. This is true — unless you go up and hug someone. Psaki then tried to claim that Kamala had been wearing a mask inside.

But Doocy had the goods on that as well, pointing out, as I did earlier, that she was unmasked during the Senate confirmation vote for Jackson. That’s when Psaki advised on that well-known COVID exception: “She was playing an important role in confirming the first black woman to the Supreme Court.” The virus knows the importance of the event and will skip right over everyone involved.

Another reporter followed up on the question, and Psaki tried to claim that Kamala was “socially distanced.”

How is hugging Jackson and standing right next to Biden being “socially distanced”? No, she wasn’t “about six feet away” — that’s just a straight-up lie.

Here she is during the confirmation vote.

But this is an excellent example of how nonsensical all these rules are, and how they refuse to even follow them. They just want you to. If you call them on it, they’ll have all kinds of excuses and exceptions as to why they don’t have to. They’ll flip through hoops to justify themselves, just as Psaki is doing here.

But Psaki is so ready to be out the door that her lies are getting worse, wanting you to deny your own eyes — and that’s why I would rate this as one of her worst ever.