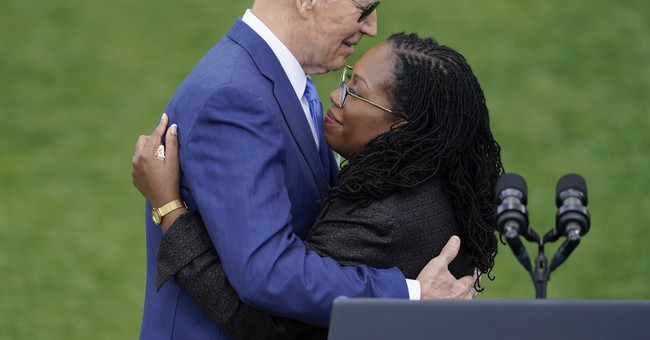 Joe Biden had Ketanji Brown Jackson visit the White House on Friday to celebrate her confirmation to the Supreme Court by the U.S. Senate on Thursday. He also invited Kamala Harris to the event.

While Biden did laud Jackson, he just couldn’t stop himself from attacking Republicans and accusing them of putting her through “verbal abuse” and the “most vile and baseless accusations.” Biden lies a lot but that was a true whopper, especially given the “vile and baseless accusations” that Democrats have promoted against Republican nominees-even including gang rape. Republicans, on the other hand, stuck purely to Jackson’s record and, if anything, were far too nice.

But even though the moment was supposed to be about Judge Jackson, Biden still couldn’t help making it about himself and his perpetual inclination to puff himself up. But Biden being Biden, he even tripped all over that.

America is a country that can be defined by a single word, Biden said. He couldn’t say what that word was, though.

He continued, telling a story about how close he was to Chinese President Xi Jinping (yes, we know, Joe; that’s not a good thing). How the buddies went on a road trip together, even to the “foothills of the Himalayas.”

“I was in the foothills of the Himalayas with Xi Jinping, traveling with him, that’s when I traveled 17,000 miles when I was Vice President,” Biden claimed. “I don’t know that for a fact.”

If he doesn’t know that for a fact, why is he saying it then? Just to make random, untrue statements? This is a lie that even the Washington Post has busted Biden for in the past.

A White House official conceded that Biden’s line of “traveling with” Xi is not accurate. “This was a reference to the total travel back and forth — both internally in the U.S. and China, and as well as internationally — for meetings they held together,” he said. “Some travel was in parallel, some was separately to joint destinations.”

Kamala’s face was something else in response to Biden’s remarks, as Not the Bee joked. Even she gives him a side-eye on this one.

Biden continued the story, saying that Xi asked him if he had one word, how would he define America, and he responded that “we think anything is possible.” Chances this happened this way? Zero to none, given Biden’s habit of prevarication. Now that’s not a bad word; indeed, that’s part of the reason that many people come to this country, in addition to freedom — the one word I probably would pick.

But then he went on to say that’s why people regard us as “the ugly American.” Um, what? Sometimes my brain hurts with the job of trying to figure out the logic — or lack thereof — of Joe Biden’s brain. I like to think I’m usually good at unraveling his special brand of confusion. Sorry, I’m not getting this one at all — how the “possibility” of America makes us the “ugly American.” It’s that freedom and possibility that has made us a beacon to the world. But somehow, Democrats like Biden always try to ding America-even at a point where he’s supposed to be praising it.