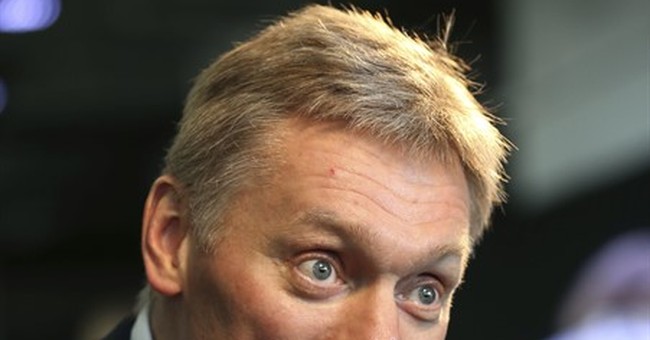 Peskov argued that the well-documented atrocities uncovered in the Kiev suburb of Bucha are “bold fakes.” Peskov said, “We deny the Russian military can have something in common with these atrocities and that dead bodies were shown on the streets of Bucha” Actually, anyone with even a passing acquaintance of how the Russian Army, or its antecedent, the Red Army, operates knows that calculated atrocities are how they work (see The Ukrainian Army Liberates Territory From Russian Invaders and Discovers Murdered Civilians; Shocking Evidence of Mass-Scale Russian War Crimes Raises the Stakes in Ukraine, and Russian Torture Chamber Discovered in Liberated Ukraine Town as the Russian Army Continues to Do What It Is Good at Doing).

(Yes, I’m aware of the video of Russian prisoners being shot, Questionable Videos of Abuse of Russian Prisoners of War Surface but Ukraine Has an Obligation to Investigate, and the video of the execution of a wounded Russian by the Georgian volunteer battalion; sorry, none of that exists in the same universe as Bucha.)

He said that NATO’s purpose is to confront Russia (I would argue that Russia has set about to give NATO a purpose starting with its invasion of Georgia in 2008 and its hijinks in Ukraine before the invasion). Now that Russia has done something the USSR never managed to do, which is persuade a majority of Finns and Swedes that joining NATO is something they need to do, Peskov is very, very unhappy.

He added that if Finland and Sweden joined NATO Russia would have to “make our Western flank more sophisticated in terms of ensuring our security”.

“Everything is about mutual deterring and should one side – and we consider NATO to be one side – be more powerful than the other, especially in terms of nuclear arms, then it will be considered a threat for the whole architecture of security and it will take us to take additional measures,” he said.

The Russian withdrawal from northern Ukraine was an “act of good will” to facilitate negotiations.

The maternity hospital in Mariupol was not bombed, and no one was killed while the Russian Air Force was not bombing it; “We have very serious reasons to believe it was a fake, and we insist on that.”

PESKOV: No, no, it’s a wrong understanding of what is going on.

AUSTIN: What is wrong about what I just said?

AUSTIN: You’ve lost thousands of troops, how many troops have you lost?

PESKOV: We’ve had significant losses of troops and it’s a huge tragedy for us.

I don’t know what “significant” means in numbers, but my suspicion it is a lot more than the 1,351 dead, and 3,825 wounded Russia admits to-which is about the same as the number of deaths and hospitalizations from alcohol poisoning in Moscow over a holiday weekend. NATO’s estimate last week was 7,000 to 15,000 dead, which is sort of like “from some to a lot” in terms of specificity. Using Russia’s own killed-to-wounded ratio means another 20,000 to 48,000 Russian troops are out of action due to wounds.

The most bizarre offering from Peskov, in my view, was how Russia was saving the world from World War III by invading a neighbor who could do them no harm.

Imagine that Ukraine is a NATO member and attacks Russia to return Crimea. Applying the Article 5 of the NATO Charter, nuclear-weapon Allies will have to defend Ukraine, which could lead to a third world war. The work being done now protects us from the potential threat of such a war.

This is what is called Martian logic. Aside from Crimea not being part of Russia, Article 5 of the North Atlantic Treaty doesn’t apply if you attack someone. It only applies if you are attacked. The odds of Ukraine ever precipitating a war with Russia over Crimea are about zero. What Peskov is really concerned about is Russia’s ability to invade neighbors like Georgia and Ukraine.

This is the full interview.