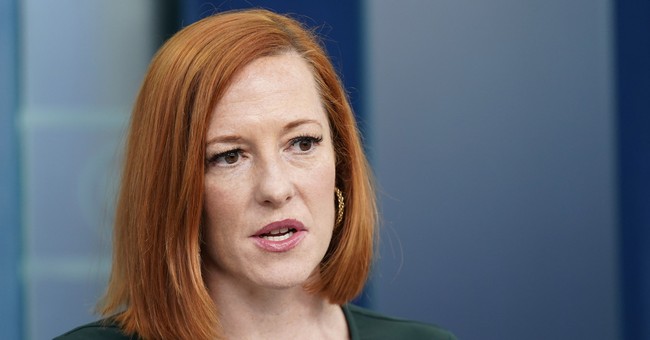 I wrote earlier about the Hunter Biden getting his father Joe to write a college recommendation for the son of one of his Chinese business partners, Jonathan Li, according to emails on Hunter’s laptop.

Joe Biden has repeatedly claimed he did not know about his son’s business dealings. This showed — yet again — what a lie this was.

Fox’s Peter Doocy grilled White House Press Secretary Jen Psaki on the question on Wednesday. You can see how red her face is. She’s so ready to be out the door and done with having to cover for Joe Biden.

Psaki claimed she had no confirmation or nothing to say about the report. Why? She was aware of the report; she knew she would be asked about it. What is Joe Biden’s answer to the report? If he has no answer, we have to assume that it’s true. Not only is it for a biz partner of Hunter’s, but it’s for the CEO of a company connected to the Chinese government. That’s the problem with that association and Hunter’s connection to it.

Additionally, there’s the question, as Doocy points out, of “doing favors” for the business partners. Do we know what Joe Biden might have gotten in return for such a favor, Doocy asks. Psaki refuses to answer the question.

But then Doocy followed up with another troubling question about an email that showed Hunter Biden was planning on Joe Biden, Jill Biden, and Joe’s brother Jim becoming “office mates” with Gongwen Dong, an “emissary” for a chairman for CEFC, the Chinese energy company — the Chinese company with which Hunter was involved with.

Psaki denied that they were ever “office mates.” She says that, but she doesn’t want to give a complete answer.

The email to the landlord shows Hunter asking the landlord for the keys for his father, family members, and Dong, as well as for new signage reflecting the CEFC connection, as well as The Biden Foundation.

So exactly how could Biden be unaware of his son’s dealings, if he was about to share office space with his son’s business associates?

It appears that after Hunter made that request, he then had a falling out with the building management over sneaking people in the back entrance of the building, including Lunden Roberts, who was later revealed to be the mother of his illegitimate child. So ultimately, they didn’t go through with it, and Hunter moved out.

But the question remains about all these connections, particularly when the Biden family benefited from Hunter’s business dealings, according to the emails, and Joe Biden is alleged to have gotten a percentage.