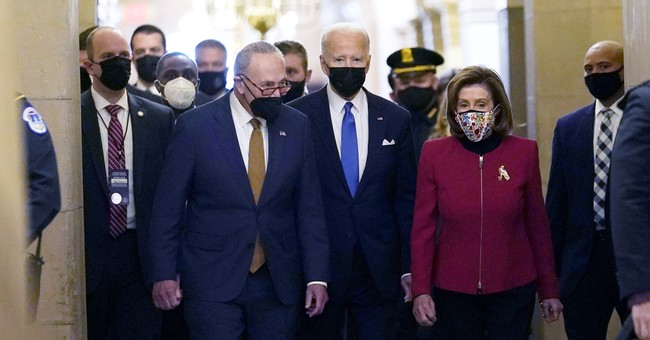 How bad are things for Democrats as the nation hurtles toward the November mid-terms? I guess it depends on who you ask. If you are taking your cues from the White House, you might believe things are going just great.

But when you actually talk to people outside the beltway, you get a completely different story. That’s the subject of a new report from Politico which shared the results of two different focus groups, both constituted of core Biden voters. Their demographic breakdowns are as follows: “Black Base, Always vote for Dems, Ages 25+” and “Youth Base; Always vote for Dems, Ages 25 – 39.”

These are people who are supposed to be the most loyal and forgiving of Democrat woes, and by polling data, they are. Yet, even they are not buying the “everything is roses” propaganda campaign coming from the White House and some in the media.

Despite the groups being made up of highly liberal voters, their concerns mirror most of the rest of the country. Inflation is eating away at their bottom line, causing anxiety and exhaustion with what is starting to feel like a never-ending cycle of price hikes. Food shortages and other supply chain woes are also hitting home.

In the midst of that, the Democrat Party has decided to tout the American Rescue Plan, a boondoggle spending bill that helped create the current inflation crisis and the recently signed infrastructure plan. Yet, that doesn’t seem to be resonating.

They had little positive to say about all the Covid money in the ARP or the new bridges that would be built with the infrastructure money.

A typical response came from a young white woman from Montana: “I think Democrats have just been really ineffectual.”

The Democrats face the problem of trying to convince people to not believe their lying eyes. You might be able to gaslight people on foreign policy, but you can’t do so in regards to their bank account. You can’t hide the meat shortages at the supermarkets or the fact that gas has doubled under Biden’s tenure. At the end of the day, touting jobs reports and claiming the economy is booming isn’t going to cut it when individual families are getting crushed.

Meanwhile, crime spikes, especially for those who live in urban areas, are producing fear, to the point where one man in the focus group spoke against so-called bail reform, a top Democrat priority that puts repeat offenders back out onto the streets. On the pandemic, the Biden voters are tired of the restrictions and do not give the president high marks any longer.

When asked about Ukraine, the focus group of black voters was more skeptical of sending billions in aid to the Eastern European nation currently being invaded by Russia.

After hearing the price tag of the bill, one Black male Biden voter replied, “They need to take that money back and give it to Black people for reparations.”

That statement shows the corner Democrats have painted themselves into. They’ve so leaned into racial grievance politics that some of their voters now expect something that isn’t going to happen. When that promise is good and fully broken, it’s only going to lead to more discontent.

Regardless, I think the most telling line from the focus groups involved a black woman talking about her lack of enthusiasm for the mid-terms.

One Black female participant said she didn’t feel much urgency about the midterms “because at this moment the Democrats [are] running the House and they’re not getting much done.”

Ultimately, that’s why Democrats are screwed. It’s not that anyone should expect black voters or young voters, by far the most reliable Democrat blocks, to suddenly start voting majority Republican. But what can happen is a lack of turnout that only helps the GOP’s already golden prospects. The White House’s messaging simply isn’t working, and there’s little reason to believe the dynamics shown in these focus groups will change before November.