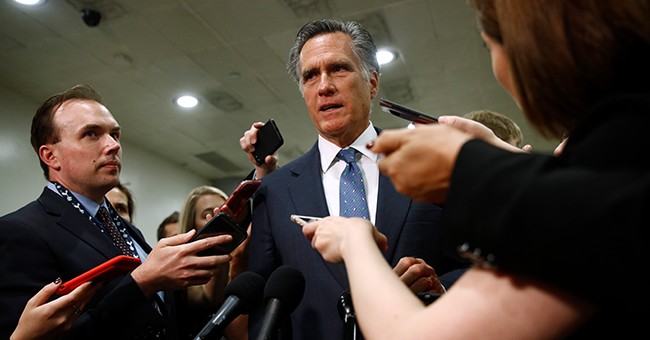 Sen. Mitt Romney has made his decision on Supreme Court nominee Ketanji Brown Jackson, and you are going to be incredibly…not shocked at all by what it is.

Brown Jackson’s confirmation battle has taken center stage over the last several weeks, with revelations surrounding her leniency on pedophiles becoming the most talked about topic. On the merits of her judicial philosophy as well, the current D.C. Circuit judge made some incredibly disturbing statements. At one point, she refused to define what a woman is, citing the fact that she’s not a biologist. When queried on natural rights, the foundation of the Constitution, Brown Jackson asserted she holds no position. Further, when pressed on when a human being gains equal protection under the law, she again played dumb.

So in light of all of that, what has the “severely conservative” Mitt Romney decided to do? Here’s his answer.

While some conservative pundits asserted that Romney would fall in line, especially given how red his state is, I called this one early on. It was obvious to me after the Utah senator criticized Republicans for asking Brown Jackson tough questions that he was going to fold.

For a man who claims to always be guided by principle, this sure is an unprincipled move. Romney claims to be against abortion, yet he’s voting to confirm someone who will be a rubber stamp for the continued killing of children in the womb. Romney claims to care about individual rights, yet he’s voting to confirm someone who refuses to even state they exist. There’s nothing conservative about that.

Utah is not Maine. It’s one thing for a squish like Susan Collins to vote for Brown Jackson. You not only expect it, but you understand it. Romney has no such excuse, and nods to collegiality should not trump the radical beliefs of a Supreme Court nominee.

And while Romney is willing to stand up and affirm pro-abortion zealots, he’s not willing to endorse Sen. Mike Lee, a staunch, mainstream conservative in his own state.

Lee is running against deranged conspiracy nut Evan McMullin (of 2016 election fame), but Romney just doesn’t want to get involved. When Democrats come calling, though, he’s there to answer the phone. That’s been the pattern throughout his career, especially during and after the Trump era. If there’s a Republican to spit on and chastise, Romney is always ready and willing. But when it comes time to stand against the far-left, he folds like a cheap suit.

Perhaps this means Romney is planning on retiring after 2024? It’s hard to imagine him making this move if he fancies getting re-elected. And surely he doesn’t still have delusions of being the 2024 Republican nominee? Either way, GOP voters should reject this kind of political cowardice.