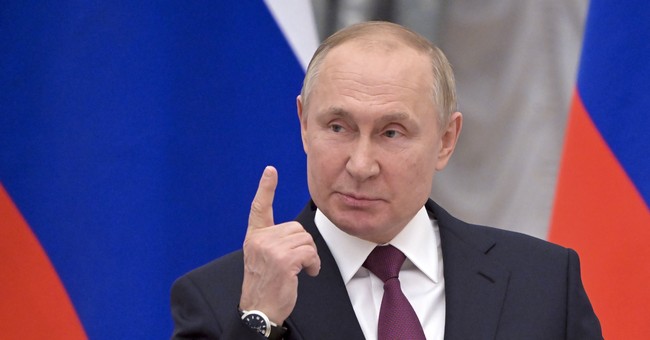 The liberation of the Kiev suburb of Bucha revealed evidence indicating that Russian soldiers occupying that city engaged in the murder and rape of Ukrainian citizens.

Read RedState’s coverage of the Russian Army going back to its WW II roots in the killing of civilians in Bucha at The Ukrainian Army Liberates Territory From Russian Invaders and Discovers Murdered Civilians; Shocking Evidence of Mass-Scale Russian War Crimes Raises the Stakes in Ukraine; Russian Torture Chamber Discovered in Liberated Ukraine Town as the Russian Army Continues to Do What It Is Good at Doing.

Russia’s atrocities have obviously caught Moscow by surprise, though they shouldn’t have. When you fire up your barely trained and unsoldierly army to invade a neighboring country to “denazify” it, you can’t be shocked when your soldiers start killing nazis. Or people who might be nazis. Or people who might have had nazi thoughts or knew someone who might have had nazi thoughts. The murders in Bucha were a direct and foreseeable outcome of Russian President Vladimir Putin’s pre-war rhetoric, and he deserves the moniker of “convicted war criminal;” see BREAKING: Joe Biden Calls for Vladimir Putin to Face War Crimes Trial for Atrocities in Ukraine.

So far, the Russians have launched three competing narratives to explain the bodies in the streets of Bucha.

This explanation depends upon the reader being unable to count. Ukrainian Army units liberated Bucha on March 31, driving Russian units (or stragglers and looters) out. The first journalists filed reports on April 1, including images of dead civilians. By April 2, war crimes stories were appearing in the media.

This was a big story among the pro-Russian and RUS-bot accounts on social media. It is based on a Ukrainian statement that security forces were clearing Bucha. Unfortunately, the only newspaper account I can find of this allegation is in Russian. If you use Google Chrome, just right-click for the translation. Below is an excellent example of this genre from Twitter.

Again, keep in mind that this alleged police operation occurred after the war crimes stories appeared-to the extent it existed,

Dead were killed by Ukrainian artillery

Today, the Russians rolled out their third fabrication. What you see are Ukrainians and Russians killed by Ukrainian artillery.

🇷🇺RUSSIAN AMBASSADOR TO THE US ANATOLY ANTONOV SAYS THE UNITED STATES IS DELIBERATELY HUSHING UP THE FACT THAT AFTER THE WITHDRAWAL OF RUSSIAN TROOPS, UKRAINIAN FORCES SUBJECTED THE CITY OF BUCHA TO ARTILLERY FIRE, WHICH COULD HAVE LED TO LOSSES AMONG THE CIVILIAN POPULATION.

This is the excuse they are taking to the United Nations, so I suspect the other two will vanish in short order. There “might” have been some civilian casualties from artillery, but absent field forensic work, that can’t be established.

The Ukrainians have buried dozens of Russian soldiers that the Russian Army couldn’t be bothered to recover. But, of course, that doesn’t explain the civilian dead.

This Twitter thread appears to be the Q-Source for all possible alternative theories to gloss over the savagery of the Russian Army in both victory and defeat.

This is a cross between “deny everything, admit nothing, blame others, and make counter-accusations” and Bart Simpon shouting, “I didn’t do it. Nobody saw me do it. You can’t prove anything.”

This dog’s breakfast of stupid is the case that Russia is trying to take to the UN Security Council.

“It is hard to imagine and realize, but the British presidency of the Security Council, which has just begun, is trying to deny us our right to request a separate Security Council meeting on the terrible Ukrainian provocation in Bucha. We requested the April 4 meeting at 3 P.M. (10 P.M. Moscow time – TASS), 24 hours before the scheduled meeting [on Tuesday] in full compliance with the Security Council’s rules of procedure,” Polyansky said in his Telegram channel.

“We will insist that the meeting be held on Monday, as requested,” the diplomat said.

“We are shocked at the scale and brutality of the staging organized in Bucha in the best traditions of ‘white helmet cinema,'” Polyansky pointed out, “Today’s Ukrainian neo-Nazis are completely faithful to Goebbels’ old Nazi school of provocations and are trying to shift the blame to Russia.” He noted that “there are striking inconsistencies and mistakes in the production.” “It has already been refuted on the Internet,” he noted.

A multiplicity of self-contradictory excuses is such a quintessentially Russian way of dealing with a crisis. The Russians might be masters of creating macro-level fake narratives, like the KGB’s epic creation of the story that the CIA created AIDS in Africa, but they are somewhat dimwitted on crisis management. Russian media can’t challenge government narratives, so the Russians have the freedom to throw stuff against the wall and hope it sticks. This strategy shows they handled the shootdown of Malaysia Airways Flight MH-17 and the poisoning of opposition leader Alexsei Navalny.

The saving grace this time is that this event took place in front of dozens of independent journalists and hundreds of witnesses. And the stench from this is only going to grow as more areas are liberated.