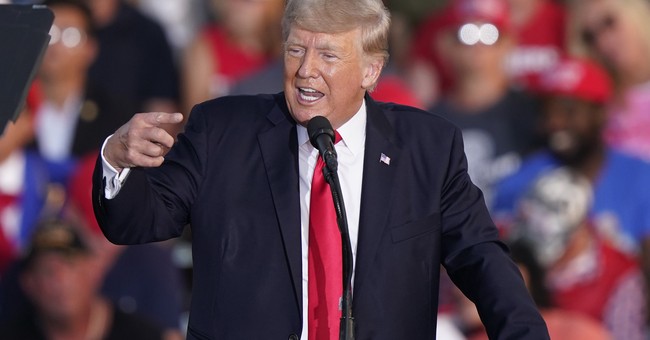 President Donald Trump had a “Save America” rally in Washington Township, Michigan on Saturday. The Michigan Star Sports Center was packed to capacity with thousands more outside the arena.

Trump got down to it right away, calling out all the harms that the Biden Administration had wrought upon the country in such a short time, starting with the record inflation and record-high gas prices — two of the most pressing issues to Americans as we go into the midterms.

Trump warned, “We’re standing up against some of the most sinister forces, entrenched interests, and vicious opponents our people have ever seen.” He noted that the real danger the country faced was not so much from foreign countries but from the “sick and radical” politicians who wanted to destroy the country from within.

He pointed out how Biden’s weakness had led to what was happening in Ukraine and that now Biden was pleading with Venezuela for oil when we had ample supply of our own, but Biden wouldn’t encourage our production. What a change this was from a year-and-a-half ago, Trump said, and people can feel it in their pocketbooks.

“The choice this November is very simple, if you want high crime, high prices, high taxes, high corruption, and high incompetence, vote for the radical Democrats. If you want a country that is strong, sovereign, safe, and secure, you must vote for America First Republicans.”

He brought up some of the breaking topics of the week, including Hunter Biden and White House Press Secretary Jen Psaki reportedly leaving in the near future for a deal with “MSDNC” — as Trump termed it.

He teased that they needed a red-head at the network.

Trump also pointed out Joe Biden’s constant problem of gaffes and that his team is always having to rush out to correct and clean up after him.

Trump appealed straight to the heart of the folks in Michigan and praised everything that they had brought to the nation, and talked about the rights of Americans.

“Our American liberty is your God-given right…From Midland to Mackinaw, from Lansing to Grand Rapids, from Battle Creek — oh…I love that cereal [home of Kelloggs and known as Cereal City] — to right here in Washington Township, we inherit the legacy of Michigan patriots who gave their blood, sweat, and tears for this beloved nation. This is the state where Henry Ford invented the assembly line — that’s not bad. It’s the place where General Motors, Chrysler, and Kellogg revolutionized entire industries. And Michigan is the state that gave us Motown and Mustang, and rivaled might — you gave us the rivaled might of the great American midwest — that’s big stuff.” We will not let what has been so “brilliantly built” for us for nearly 250 years be taken from us, Trump said.

Now that’s a recitation that neither Joe Biden nor Kamala Harris could have delivered if they even understood it.

This explains why the most recent poll from last week is showing Trump would trounce both Biden and Harris, if he ran again in 2024.

The 45th president would unseat Biden by a 47% to 41% margin, according to the Harvard CAPS-Harris Poll published by The Hill. However, 12% of voters are undecided.

Harris going up against Trump would produce an even worse result for Democrats — 49% would vote for the former president compared to 38% for the veep.