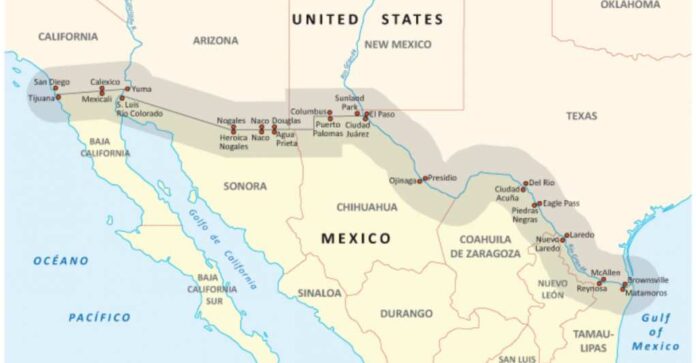 We’ve got issues with the southern border. Everyone knows that already. And yet, Biden can’t even find it on a map anymore…

Mark Morgan is the former acting commissioner of the U.S. Customs and Border Protection Agency. He served under the outstanding leadership of Donald Trump and was there to witness the successes that the former president had at stopping the flood of illegals that were pressing the southern border. And he was there to witness the change when Joe Biden executively removed the safeguards left in place by Trump that would ultimately lead to the record-setting surge.

Mark Morgan stated to the Daily Wire that “If your policies are encouraging, incentivizing, illegal immigration, you’re making our border less secure. You’ve got people that think they’re trying to secure the border. But the problem is they’re actually being led by ideology rather than reality. I’ve served in this country for 35 years, six administrations, both Republican and Democrat. I’ve never seen an administration filled with so many ideologues.”

The lack of focus that Biden has on America is alarming. He seems more interested in watching the border between Russia and Ukraine than he is in securing America’s southern border. He is more interested in absolute strangers found halfway around the world. Biden does not care about the people he is sworn to protect and serve.

Under Biden’s watch, Morgan reports that almost 8,000 illegals are arrested every day. He was quick to point out that Biden’s number is double what Trump’s was at the peak of the surge in 2019. Biden made it his mission to secretly inform those camping to the south that the door was open, and they could come on across.

The Daily Wire reported that “The latest border controversy fueling debate surrounds Title 42, a policy first implemented by Trump in March 2020. Through the Centers for Disease Control and Prevention (CDC), the pandemic-era policy allows for the swift deportation of some migrants encountered at the border. It is responsible for the expulsion of about 1.7 million migrants.”

The Washington Free Beacon found and noted that the Democrats strongly pressured Biden not to end Title 42. His administration was considering its demise, but Biden bowed to pressure and had no spine to stand up to the pressure he fell under.

The southern border is a passageway for human smugglers and drug runners. They love the open-door policy that Biden has allowed. They love the fact that he ignores the issue because they can now move their illegal cargo whenever they want.

The Daily Wire reported that just in the El Paso, Texas area alone, border agents seized more than four times the regular amount of Methamphetamine than they did in 2018. The amount of drugs flowing into the country has quadrupled, and Joe Biden seems to look around the world at other borders instead of the one in his backyard.

The drug lords and human smugglers are not as ignorant as Biden would make them out to be. They watch the political climate and make their moves when the border is ignored. And Biden has certainly ignored the border his entire term.

There are a lot of reasons why Biden ignores the southern border. He wants to bring as many illegals into the country as he can to make them all legal residents before leaving office. He hopes that millions of new voters will have some gratitude they owe to the Democrats, so they will be inclined to vote for them in future elections.

Biden is the laziest and clueless president of the age. He acts like he is working on the problem but only moves when people start questioning him. As long as it looks like he is working on it, the people will leave him alone. But the people are sick and tired of being ignored and overrun by illegals. Biden may look to the east for his border, but his homeland will have a change of guard very soon as the midterm election takes place.

Biden thinks that if he forgets where the border is, he won’t have to deal with the issues coming from it.