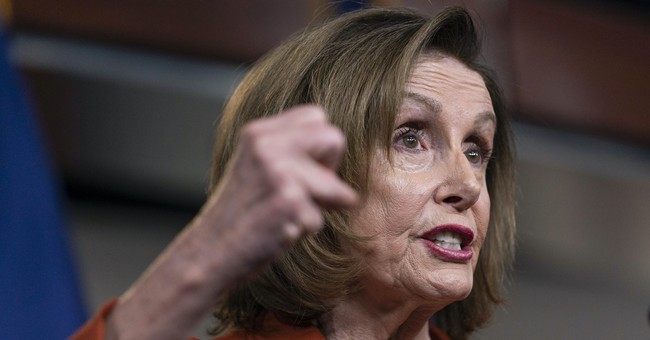 It’s long past time that House Speaker Nancy Pelosi (D-CA) should have retired. I’m not a big advocate of hide-bound rules as to age or term limits. But in her and in Joe Biden, you see the problems of advanced age and related issues that are harming our country.

Of course, it’s not just the age, but lousy policies that they are trying to impose on us as well, such as Joe Biden deciding that instead of working on promoting more American production he’s just going to drain our reserve of petroleum dry to try to drop prices before the midterms so Americans won’t decimate Democrats in November.

Pelosi was asked on Thursday about the gas prices. She started with a little truth and in the process, undercut one of Biden’s big lies, blaming everything on the “Putin price hike.” She made a mistake and admitted that was only “partially” true.

But that was probably the best comment. It all went downhill from there. Let’s hear from Nancy Pelosi on the reason for inflation — which she claims is because of low unemployment because of the policies of the Democrats.

First, this is nonsense, because low unemployment isn’t a cause of inflation, profligate spending is and that’s what the problem was in this case — the massive pandemic spending by the Democrats. President Donald Trump had record low unemployment before the pandemic and no inflation. Second, the Democrats aren’t responsible for lowering unemployment — it went down when people came back to work, so not something that they can brag about.

So that ignorance or flat-out denial of reality is how you then get Pelosi — after just talking about inflation — saying that what they’re asking in terms of the budget isn’t even enough, that they want to spend even more money. This is madness.

Pelosi further tries to explain taxes would be put on gas and oil production in Biden’s budget.

Why would you do such a thing when gas prices are already through the roof? That would be passed along to the consumer — she even admits it — and that would make the prices go up even more. That’s insane. But they are doing it because their anti-energy green dreams trump all sanity and they don’t care how many Americans they hurt in the process. It’s about seizing that “long-term opportunity” to push the leftist energy goals.

Increasing American oil production to lower prices and ensure American independence can’t be allowed because that might wreck those green dreams.

It’s always about pushing that and, in this case, using the high prices as an excuse.

But notice she talks about the use of the Defense Production Act to help “diversify” energy options. Can we talk about who the fascists are here? The Defense Production Act gives the government the ability to dictate to private industry to make it produce what the government wants. It’s a questionable thing to employ, but at least during a war and a pandemic, you have some form of an excuse. Here, the only excuse is their radical politics — that’s not a legitimate use of the Act. This is them imposing their will to impose their politics and increase the push toward green energy.

But of course, she can’t admit that they’re the problem.