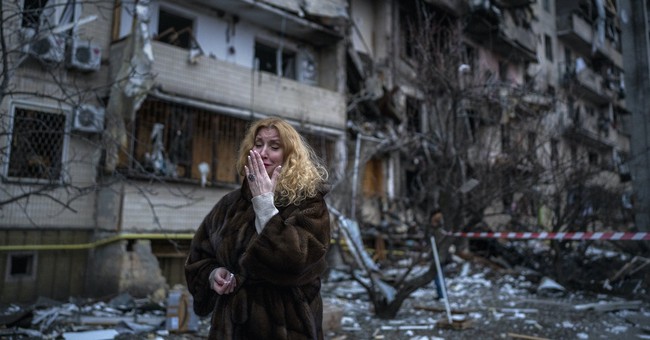 “I can’t argue with your conclusions.” So said Gen. Tod Wolters, head of U.S. European Command and NATO’s Supreme Allied Commander Europe (SACEUR), in agreement that Joe Biden’s threat of sanctions to “deter” Vladimir Putin from launching an invasion against Ukraine was a failure. (Joe begs to differ.)

Wolters made the admission on Wednesday during testimony before the House Armed Services Committee on the continuing war in Ukraine and its “overarching effect on the United States and NATO,” as reported by the Washington Examiner. Joining Gen. Wolters in testimony was Dr. Celeste Wallander, the assistant secretary of defense for international security affairs.

During questioning from Wisconsin Republican Rep. Mike Gallagher, Wolters said he was part of the effort to deter Russia, as well. Gallagher asked, as transcribed by WE: “Would it be fair to say that deterrence failed in Ukraine?”

Wolters began to give a typical non-answer to Gallagher’s question: “Number one, I would say that NATO’s solidarity remained” — prompting the lawmaker to cut him off and demand a direct answer.

Amazing stuff; made even more amazing by Wolters’s admission:

I can’t argue with your conclusions.

Biden’s threat of sanctions dragged on for weeks, as Russia continued to amass troops and equipment on its border with Ukraine and Putin continued to make bellicose threats. Still, Biden did zero. Even worse, as RedState reported on February 24, White House Press Secretary Jen Psaki incredibly and incredulously declared Biden’s sanctions strategy had “worked” — despite Russia having invaded Ukraine.

Wolters continued, saying the U.S. would likely deploy additional troops to Europe as a result.

“Completion of the Ukraine-Russia scenario”? That’s a rather antiseptic way to describe the day and night horror being indiscriminately visited on the men, women, and children of Ukraine, is it not?

I’m not George Patton, but additional U.S. forces to do what? Shore up the defense of NATO countries against a Russian attack that won’t happen? Strut U.S. tail feathers to demonstrate resolve after the invasion ship has already sailed? And for whom? NATO countries, Vladimir Putin, or voters in November?

Meanwhile, as we reported on Tuesday, Putin’s invasion continues to bog down, leading Russia to draft 100,000 reservists with combat experience — to send to fight in Ukraine.

Reports suggest Russia has now committed 70-75 percent of its entire military to the war, after failing to achieve its original invasion objectives. Call me cynical, but Biden will somehow try to twist this little factoid into a win, based entirely on something he did — or didn’t do.

Speaking of Joe, after weeks of threatened sanctions — which, when they finally came, critics slammed, in effect, as too little, too late — the most inept president in modern history got a bit testy (I know, right?) and snapped, last Thursday: “No one expected the sanctions to keep anything from happening.” Oops.

In response, in one of her near-daily “clean-up on aisle 46” responses, Jen Psaki proclaimed “That’s not exactly what he meant” — a perfect analogy between Biden’s failed Ukraine policy and his disastrous presidency to date as a whole: Pay no attention to what I did; focus only on what I meant to do.

With reports suggesting Putin has been kept in the dark about the failures of his army in Ukraine — a claim about which I’m skeptical, at best — one thing is certain:

Joe Biden and his White House will continue to claim “mission accomplished” where there is yet to be one.