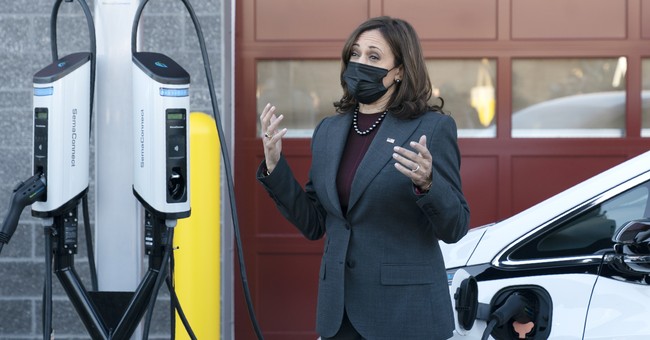 It seems like not a week goes by where we aren’t having to recap another one of Vice President Kamala Harris’ infamous word salads. Sadly, this week has been no exception.

It happened on Wednesday, when Harris met with Jamaican Prime Minister Andrew Holness at the White House to reaffirm the United States’ commitment to supporting the Caribbean island and keeping up friendly diplomatic relations. Things started off rather mundanely as Harris noted her familial ties to the region (her father Donald J. Harris, a retired Stanford economics professor, emigrated to the U.S. from Jamaica in the early 1960s):

Harris, in brief remarks during a photo opportunity with reporters, noted her Jamaican descent and trips to the island in her childhood as she welcomed Holness.

“We are acutely aware of the interconnection and interdependence between the United States and Jamaica,” Harris said, adding that she shared a “history with millions of Americans who have their roots through the generations in Jamaica.”

But then things got a little awkward when Harris talked about how the United States would help the country in its COVID relief efforts. See if you can make sense of this:

Yikes. That was just beyond painful to watch, even for her. And to think that the Biden White House actually believes she’s going to be an asset on the campaign trail ahead of the 2022 midterm elections.

In addition to that cringe-worthy moment, excerpts from a new book written by a couple of New York Times reporters detailed how Harris has been quite the diva, allegedly demanding the same reverential (and royal) treatment President Joe Biden gets when he walks into a room and being obsessive about her image and how she appears on the covers of and inside the pages of fashion magazines, all “issues” that should not even remotely be a priority considering all the serious things going on in the world.

There was also further confirmation of tensions that are said to have been escalating in recent months between the Biden and Harris camps, with Harris’ staff believing Team Biden staffers are quick to blame her for all his issues and Biden’s team believing Harris isn’t up to the job she’s supposed to be doing (making Joe look good).

As I’ve said before, it doesn’t matter what Kamala Harris has been assigned to take care of; she continually demonstrates that she’s just not very good at what she does. To reemphasize a point I and others here have previously made, this is what happens when one’s career starts off the way Harris’ did. You begin to expect to be given preferential treatment as you climb the ladder and be treated to fawning interviews in the press because of “who you are” and what you supposedly represent from a “historical” perspective.

As it turns out, being the “first” whatever really doesn’t amount to a hill of beans to the average person, especially if you keep demonstrating that not only are you really, really bad at what you do (which Harris often does) but also that you’re about as genuine as a $3 bill.