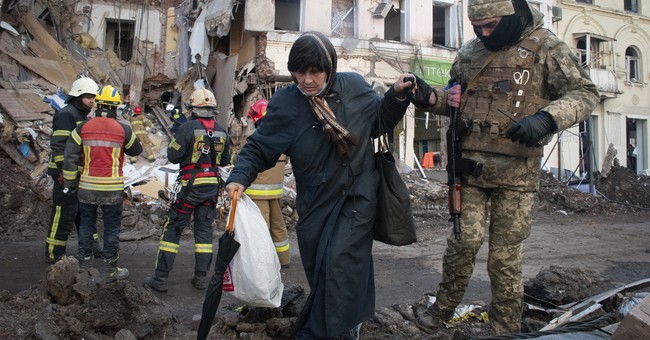 Tuesday, March 29th was Vietnam Veterans Day, a long-overdue commemoration of the forgotten and despised by many who fought in a war not of their choosing. Last year, I noted my late oldest brother, a proud Vietnam veteran, and shared a letter he sent our late father who himself fought in World War Two and Korea, detailing the horrors of a firefight. I saw what the war did to my brother. I have no taste for war save as an absolute last option and, if entered into, fought with but one non-negotiable goal: complete victory. Nothing else is acceptable.

Taking this to the Russian-Ukrainian war, while hopeful signs exist that Russia is tapping out, the fighting continues. This comes as a relief to all save perhaps a few hardcore neocons who are itching for a fight with Putin. The rest of us wish for peace to return by any means available that does not involve American military personnel putting their lives on the line.

There has been a curious hijacking of the argument that American troops should never set foot in Ukraine by some on the right. This faction, nominally led by Tucker Carlson and Candace Owens among lesser lightweights, seems more intent on decrying Ukrainian President Volodymyr Zelensky than denouncing Russian President Vladimir Putin. While charges they are pro-Putin remain laughable, it is a rather odd hill upon which to plant one’s flag.

Unsurprisingly, Ukrainians have taken a dim view of such people and have no hesitation in saying so. Wladimir Klitschko, former heavyweight champion of the world and brother of Kyiv mayor Vitali Klitschko (he also has former heavyweight champion of the world on his resume), recently made his feelings known during an appearance on Eric Bolling’s show on Newsmax TV.

The rallying cry for freedom moved Bolling to opine on what he called, “a small group that believes that what’s happening in Ukraine is not the United States’ problem. There’s some very popular television host, Tucker Carlson…”

“…Candace Owens as well,” Bolling went on. “Conservatives who typically, I don’t know why they’re not supporting you and Ukraine, but they’re not. What do you say to those people?”

“If you still have business and trade with Russia, and you don’t isolate Russia economically,” he continued, “you’re bringing bullets and rockets into the Russian army’s hands that kills today the innocent.”

The argument from Owens and company is that they are not supporting Russia but rather merely insisting the United States should not become involved in the conflict. Oh, and we started it.

Apparently, all that talk about Putin wishing to recreate the USSR and/or Russian Empire was utterly non-existent until we poked the bear once too often. /sarcasm off

There are easily understood aspects of both sides. Klitschko is watching his country’s invasion by Russia and his fellow citizens dying. Therefore, anything other than total opposition to Russia will not sit well. And, as mentioned above, there is no desire to see American military personnel enter the line of fire. However, there is a third path seemingly overlooked by both sides.

First, all the screaming about how Ukraine in general and Zelensky in particular are poopyheads becomes quite hollow when weighed against the pictures of destroyed buildings and desperate refugees fleeing the war. There is a time to debate who struck the match, but you’re best served by first putting out the fire. People are in need. You help them. Russia is not our friend. You oppose them until they learn to behave themselves.

Second, Ukraine must understand that we cannot go to war on their behalf. We cannot enforce a no-fly zone. We can’t send troops. Weapons and humanitarian aid? Certainly. But there it stops.

It is possible to draw this line without slagging on Ukraine or twisting oneself into knots calling Zelensky every name in the book because he’s imperfect. No sane person wants room made on the calendar for Ukrainian Veterans Day. We want innocent civilians to stop dying and the bullets to stop flying. That shouldn’t be hard to grasp.