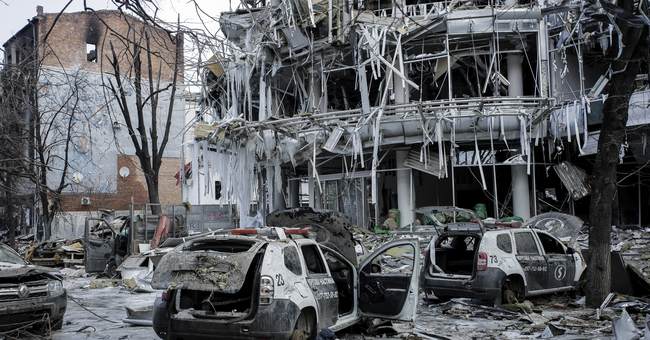 On Tuesday, Russia’s Deputy Defense Minister Alexander Fomin held a press conference after Russia-Ukraine negotiations ended in Istanbul. In that conference, he read a statement that seemed to indicate that Russia is de facto accepting that its decapitation thrust launched at Kiev at the outbreak of hostilities has failed. (Note that the deputy defense minister made the statement, not by Putin’s favorite courtier Sergei Shoigu who hasn’t been seen in public since March 11, Russia’s Defense Minister Surfaces After Two Week. Disappearance and the Mystery Deepens.)

“Due to the fact that the talks on preparing an agreement on Ukraine’s neutrality and non-nuclear status as well as on providing Ukraine with security guarantees are moving to the practical sphere, considering the principles discussed during the meeting today, in order to bolster mutual confidence and create the necessary conditions for the further talks and the achievement of the final goal – the coordination and the signing of the aforementioned agreement – the Russian Defense Ministry has made a decision to cardinally, several-fold decrease the military activity in the direction of Kiev and Chernigov,” he said.

“We are proceeding from the premise that Kiev will make corresponding basic decisions and conditions should be created for the further normal work,” the military official added.

This statement supports the strategic direction outlined by the operations director of the Russian General Staff in a briefing last week (see Russia’s General Staff Claims Invasion Objectives ‘Mainly Accomplished’ and Phase II of Ukraine Invasion Is Starting). The idea was to reduce the force directed against Kiev, Kharkiv, and other cities in northern Ukraine and focus military efforts on consolidating Russian control of Donbas and perhaps achieve a so-called “land bridge” to Crimea. That accomplished, the Russians would dig in and wait for a peace agreement.

There is a lot less to this than the Russians are claiming. The cold hard facts are that Ukrainian counter-offensives have made some areas untenable for Russian forces.

A guy named Nathan Ruser makes maps like these. They are great because of big swaths of color; he shows where Russian and Ukrainian areas of control are only as wide as the road the troops occupy. Regard the green spaces of the map as not being under the control of either side.

Northwest of Kiev, Ukrainian advances from east and west threaten to create a pocket of Russian forces. North northeast of Kiev, you’ll see the city of Chernihiv. It was encircled as late as last week. In addition, the body of Russian troops on the eastern outskirts of Kiev is in danger of being cut off after a Ukrainian counterattack severed their supply route. Further East, the city of Sumy (or Sum), which was also encircled, now has routes open to Ukrainian territory. Still further east, the city of Kharkiv was nearly surrounded, and it also has had supply routes opened to Ukrainian territory.

What the Russians want to do is pull as much of that force on the Kiev-Sumy-Kharkiv axis back into Russia, reconstitute them with vehicles pulled from storage depots and reservists who have been called up (Russia Calling 100,000 Reservists to Active Duty and Moving Wagner Group From Syria to Deal With Ukraine Manpower Crunch). Then they will ship those units east and reinforce the effort in the Donbas region.

Interestingly, the Ukrainians have captured draftees from the Donbas “republics” near Kharkiv, implying that the Russians have shifted a less capable militia force from Donbas and swapped it with a Russian unit.

The big-brain thinkers in the White House publicly doubt that the withdrawal is real.

“We need to see what the Russians actually do before we trust solely what they’ve said,” Kate Bedingfield, the White House communications director, said during Tuesday’s daily briefing. “We have no reason to believe” Moscow has abandoned its push into Kyiv. “No one should be fooled,” she continued, adding “The world should be prepared for a major offensive against other areas of Ukraine.”

I have to believe this is some sort of hardball negotiating tactic that they think will influence a negotiation they are not a party to. It is difficult to see why the Russians would pull back just to launch a new offensive over the same area, this time facing a prepared and stubborn defense. This is not to say the Russians won’t do that, but most military commanders would resist having to fight to take the same real estate twice.

There is no reason to believe the plan will work because it is hard to see how Russia generates the combat power to achieve its declared mission. However, the Russians seem prepared to try it, and they have established a narrative to explain the retreat from Kiev.

The problem with narratives is that they must be consistent.

In several public statements, Vladimir Putin has laid out his criteria for ending the war in Ukraine.

Shortly after the deputy defense minister delivered his announcement, the defense ministry posted the text of the statement to Russia’s leading social media site, vk.com. If you click through the link in Chrome, it translates the statement and comments. I’m not sure about other browsers.

No, this is not the first time the Russian Army has had its ass handed to it by a much weaker opponent. When regime spokeswoman Maria Zarahova announced it on her Telegram channel, she was dragged.

Not only Rando Russians were opposed, so were Putin’s allies.

All of this just points to what we have discussed here for the past couple of weeks. By Putin laying down a hard marker of victory demands on several occasions, he created an expectation in the minds of his supporters that he would follow through. My opinion is that Russia has now reached the point where it will have to struggle to obtain what it had already achieved by February 21 (see Vladimir Putin Runs the Table in Ukraine and Shows Joe Biden to Be a Feckless and Unreliable Security Partner) without a war. Today, the public statement agreed to leave intact a government that Putin has described as consisting of “nazis” and “drug addicts.” He agrees to leave the Ukraine armed forces in existence. There is no mention of Ukraine not joining NATO. There isn’t a whisper about Donbas independence or the annexation of Crimea. There is one message, “we’re withdrawing away from Kiev.”

This, like the helpful statements by Joe Biden (Here’s Why Biden’s Putin-Regime Change ‘Gaffe’ Was So Egregious) is doing nothing but making it more and more difficult to not only bring the Ukraine war to an end but to keep it from spreading.